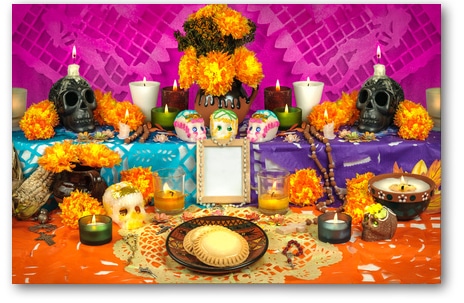 “This one, son, I embroidered when I was 16 years old, just before I married your abuelo, your grandfather,” she told me.

I preferred putting out the brightly colored papel picado and the calaveras that made me laugh more than they scared me.

Once the tablecloth and papel picado were ready, we would carefully place the little toys for the angelitos – that’s what we called those close to us who died as children.

“This little doll was your Aunt Margarita’s favoriteT,” my grandma would remember as she hung the old doll above the altar. One by one, we would take my ancestors’ special belongings out of their box. Each one would remind us of a familial anecdote. Discovering the contents of that old cardboard box was for me like opening a treasure chest.

We would place the candles that we’d bought in the market one by one on the altar: one for grandpa, another big one for Mother, another for Aunt Margarita…My grandma said that their light would guide their souls to our house, and each one had his or her own candle because there was something special to remember about each one of them.

“Grandma, I’ll place Baby Jesus and Mary,” I would say as she held the bench so that I could climb up to put them in their places at the highest part of the offering. Then we would put cempasuchitl flowers and some sugar calaveras, the kind that have the name of the deceased on their forehead..

We would also take out our treasured family pictures of our dearly departed and hang them on the altar. Oh! I couldn’t forget the glass of water and the little plate of salt…they say it’s to relieve the thirst of the souls that return.

The rest of the day my grandma would spend in the kitchen preparing our lost loved ones favorite dishes. Meanwhile, I took the petals off the cempasuchitl flowers to make a path to the offerings. In the afternoon, the house would be filled with the aroma of the food grandma had prepared: mole with chicken, red rice, little zucchinis. When I was younger I used to think that food would really be eaten, but then they explained to me that it was just so that the souls could enjoy the delicious aroma.

Ofrendas are an essential part of the Day of the Dead celebrations. The word ofrenda means offering in Spanish. They are also called altares or altars, but they are not for worship.   Some people mistakenly think that Mexicans that set up ofrendas for their defunct END_OF_DOCUMENT_TOKEN_TO_BE_REPLACED

This beautiful legend recounts the love story of two young Aztecs,  Xóchitl and Huitzilin, a romance from which the cempasuchil flower was born. This wonderful love story began when the two young Aztecs were still little. They used to spend all their spare time END_OF_DOCUMENT_TOKEN_TO_BE_REPLACED

On November 1st and 2nd Mexico celebrates the Day of the Dead, and there are two very special places where this ritual is especially impressive: Mixquic, a small town in Mexico City, and in Janitzio, a charming little island in END_OF_DOCUMENT_TOKEN_TO_BE_REPLACED