He was huge not only in size and stature but in presence as well. He had been kicked out of the Soviet Union but his affinity towards a communistic ideology did not fade; actually, more than ever, he looked to incorporate it into the Mexican experience.

His mindset and belligerence drew Frida to him and eventually into marriage. Even after the numerous objections made by her family, who were displeased by Diego’s morality, political ideology, and age (being 20 years Frida’s senior) among other things, the couple settled in the Blue House and began a turbulent bond that lasted until her death years later.

One of Frida’s most memorable quotes was when she said “There have been two great accidents in my life. One was the train, the other was Diego. Diego was by far the worst.”

Frida and Diego went through a phase of mutual growth in which their artistic styles evolved. He was hired by the Mexican government to paint murals that depicted Mexican history. His themes shared the couple’s political ideals and he would often paint Frida in them.

One of Rivera’s most significant murals, Ballad of the Revolution, not only portrays Frida as being in the middle of the revolutionary fight but as the enabling figure that hands out rifles and other weapons to the peasant soldiers; to Frida, the revolution gave her a purpose in life and she even changed her birth date to match the date of the start of the revolution, July 7, 1910.

Ironically, the Mexican government began to fear communism after Diego had already completed many murals and eventually through his own fear of prosecution he was forced to look for work elsewhere.

At the wake of the Great Depression Diego was hired by a commission in California where, in another ironic twist, saw the couple move to The United States; to the country that spoke the loudest in opposition to the communist movement and in the middle of the “Red Scare”.

Frida’s experience in the US was mixed. On the one hand, she began to achieve personal recognition for her art, and on the other, she neither enjoyed life in the States nor with her husband. 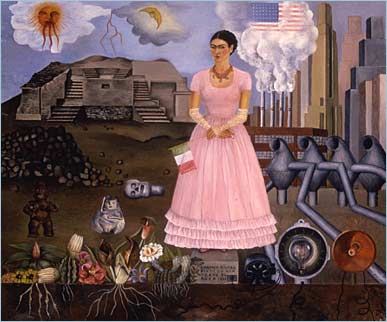 Self-portrait on the Borderline Between Mexico and the United States

For Frida, the US represented the imperial capitalistic society she stood against. She saw Americans as people who were plain, who had an addiction to industrialism and to competition.

In return, she felt and was often treated, as an outsider for her now famously characterized the style of wearing colorful folkloric dresses and having an outspoken, loud, and defiant personality. Likewise, her personal life was branded by Diego’s habitual affairs with personal assistants, as well as by her own extramarital relationships with men and women alike.

After making sure the figure is completely dry the artisan proceeds to sand the figure down. Sanding can take anywhere from an hour to a whole day. This also depends on the size of the figure. Once the figure has END_OF_DOCUMENT_TOKEN_TO_BE_REPLACED