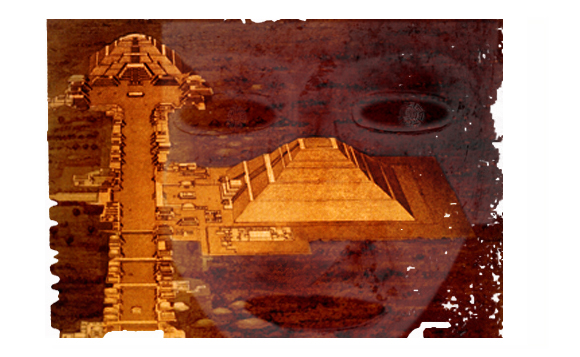 The ceremonial center was planned along a North -South axis, known as Avenue of the Dead, on both sides of which, the palaces where the higher class lived and the temples for their religious ceremonies were built.

A thousand years later, Tenochtitlan, the Aztec capital was built after the Teotihuacan model.

The urban center had a sewer system, which demonstrates their knowledge of city planning.

Each residential complex was made up of many rooms and interior courtyards. 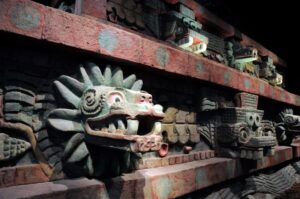 The Quetzalcoatl Temple shows the extent of their remarkable artistic talent. It is beautifully decorated with conch shells, plumes, and serpents.

They decorated their temples and the palaces of priests and noblemen with frescoes and mural paintings of religious themes.

The Teotihuacan were great merchants and they extended their trading as far as the Gulf of Mexico and Oaxaca.

Obsidian articles and pottery were some of their most important commercial products.

Pottery was handmade, but it was also mass-produced for trading using molds.

Teotihuacan was mysteriously abandoned due in part, to a great fire that might have been caused by a conquest or by barbarians from the north.

When the Aztecs went by this area, they were so impressed with its greatness that they called it Teotihuacan, which means The Place where Men become Gods.

When the Teotihuacan Empire began its decline, some northern tribes, probably culturally inferior to them, arrived in Mesoamerica.

What documents or requirements are needed to visit  Mexico?   Many countries including the US, Canada, the European Union do not need a Mexican Visa to visit Mexico for up to 180 days. Your passport is required and must be END_OF_DOCUMENT_TOKEN_TO_BE_REPLACED

Tulum rises majestically upon a small cliff that offers incomparable views of the Caribbean Sea. The gentle murmur of the waves is a constant companion of the visitor to Tulúm, at the southern end of the Riviera Maya, Quintana Roo.