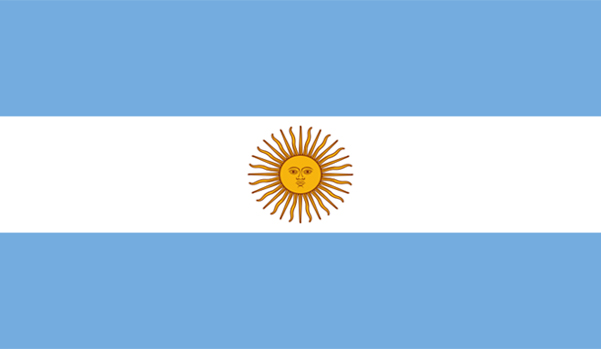 The flag of Argentina, was designed by Manuel Belgrano in 1812. Belgrano was  a lawyer, and military leader that took part in Argentina’s war of independence.  The colors were inspired by the Argentinean  cockade (military knot of ribbons). It has also been suggested thatBelgrano used the colors of the Virgin Mary’s cloak.  The flag was officially adopted in 1816.

The flag of Argentina has three horizontal stripes of equal size. The sky blue, cleste, stripes, are said to have been inspired by the sky, the white band by the clouds. At the center of the white stripe is the Sun of May which is a national emblem of Argentina and represents the Inca sun god.

The flag of Argentina is also known as La Albiceleste, the sky-blue and white.

The day of the Argentina Flag is observed every June 20.

Las Mañanitas is the traditional Mexican birthday song. It is so popular that it is now sung in most Latin American countries.  Usually this beautiful song is sung when the birthday person wakes up or before blowing the candles on the END_OF_DOCUMENT_TOKEN_TO_BE_REPLACED