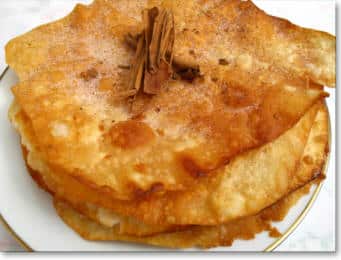 Boil one tablespoon anisette in a cup of water and leave to cool. Mix and sift the flour, baking powder and salt. Mix in the eggs, the yolk and the anisette in water, as required, and knead until the dough stiffens. Form into small balls and roll out on a floured board until very thin. Continue flattening by hand on a napkin and place on a floured table. Heat the lard .Fry one by one in the lard.

Heat the piloncillo in one cup of water with the remaining tablespoon of anisette. This mixture will thicken to a light syrup. remove from heat and strain.

Serve the fritters, broken into pieces, in bowls and pour the syrup over them.

Spanish When the first missionaries arrived in Mexico, they were faced with a very different way of life than the one they were used to.  The conquest meant not only taking over territories that had recently been discovered as America, but END_OF_DOCUMENT_TOKEN_TO_BE_REPLACED

Christmas in Mexico — my first year in the country, I thought that was an oxymoron. How could it ever feel like Christmas here without snow on the ground; without a fire in the fireplace; without the fireplace?! Well, my first END_OF_DOCUMENT_TOKEN_TO_BE_REPLACED