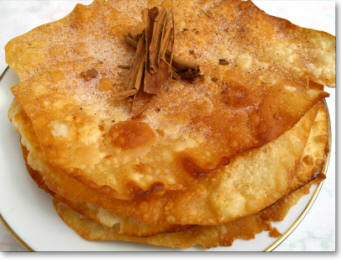 Boil one tablespoon anisette in a cup of water and leave to cool. Mix and sift the flour, baking powder and salt. Mix in the eggs, the yolk and the anisette in water, as required, and knead until the dough stiffens. Form into small balls and roll out on a floured board until very thin. Continue flattening by hand on a napkin and place on a floured table. Heat the lard .Fry one by one in the lard.

Heat the piloncillo in one cup of water with the remaining tablespoon of anisette. This mixture will thicken to a light syrup. remove from heat and strain.

Serve the buñuelos fritters, broken into pieces, in bowls and pour the syrup over them.

In recent times the Tres Leches cake or Pastel de las Tres Leches became one of the most popular Mexican Desserts.  It is a sponge cake in many recipes, or a butter cake, soaked in three kinds of milk (thus the name END_OF_DOCUMENT_TOKEN_TO_BE_REPLACED

The word Flan comes from the old French flaon, which means custard.  The history of Mexico’s  famous dessert goes back to ancient Rome, where domesticated chicken produced too many eggs which then were used to make custard. The Spaniards, when they conquered what END_OF_DOCUMENT_TOKEN_TO_BE_REPLACED