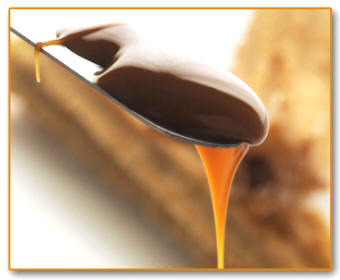 Cajeta, also known as dulce de leche, is a hispanic sweet thick milk caramel syrup.  In Mexico this sweet confection is know as cajeta and in other Spanish speaking countries it is called dulce de leche. You can use it as a delicious spread for toast, hotcakes, churros, cookies and icecream!

Follow directions and when almost cooked add one cup of sweet sherry. Continue cooking until the sherry has been absorbed.

The word Flan comes from the old French flaon, which means custard.  The history of Mexico’s  famous dessert goes back to ancient Rome, where domesticated chicken produced too many eggs which then were used to make custard. The Spaniards, when they conquered what END_OF_DOCUMENT_TOKEN_TO_BE_REPLACED

The Merienda de Reyes is truly a multicultural event.  The Spaniards brought the tradition of celebrating the Epiphany and sharing the Rosca to the New World.  The Rosca is served along with Tamales, made of corn which was the pre-Hispanic food per excel lance, and hot chocolate. Chocolate END_OF_DOCUMENT_TOKEN_TO_BE_REPLACED