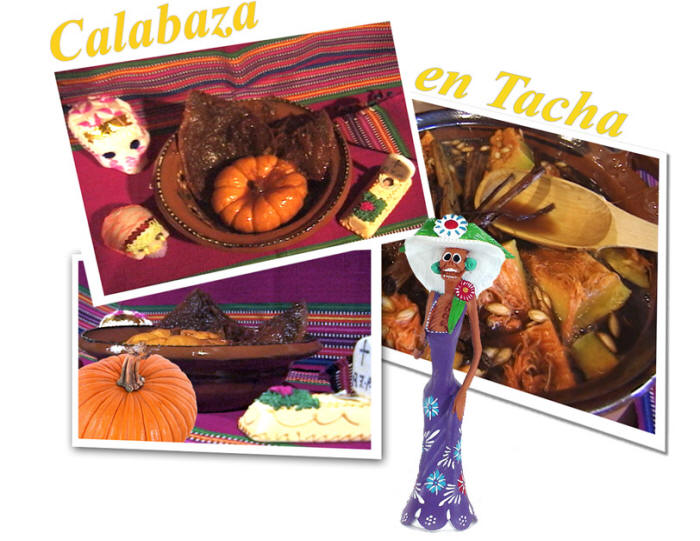 Calabaza en Tacha is another traditional dessert that is prepared during the Fiestas de Muertos.  It is very easy and delicious!

Cut the pumpkin into medium (2½” to 3″  squares or triangles). Remove seeds and strings.  With a sharp knife make diamond designs over the pulp

Put the sugar in a pan with the cinnamon, orange juice, and water. Bring to a boil and stir until the piloncillo has dissolved.

Place the first layer of  pieces of pumpkin upside down so they absorb as much juice as possible. The second layer should be with the pulp upwards. Cover and simmer.  When ready the top of the pumpkin pieces  should look somewhat glazed, and the pulp soft and golden brown.

Let cool and serve with the syrup. You can also add cold evaporated milk!
I prefer to have the pumpkin after it has been in the refrigerator for a couple of hours.

Las Mañanitas is the traditional Mexican birthday song. It is so popular that it is now sung in most Latin American countries.  Usually this beautiful song is sung when the birthday person wakes up or before blowing the candles on the END_OF_DOCUMENT_TOKEN_TO_BE_REPLACED

Ofrendas are an essential part of the Day of the Dead celebrations. The word ofrenda means offering in Spanish. They are also called altares or altars, but they are not for worship.   Some people mistakenly think that Mexicans that set up ofrendas for their defunct END_OF_DOCUMENT_TOKEN_TO_BE_REPLACED

This beautiful legend recounts the love story of two young Aztecs,  Xóchitl and Huitzilin, a romance from which the cempasuchil flower was born. This wonderful love story began when the two young Aztecs were still little. They used to spend all their spare time END_OF_DOCUMENT_TOKEN_TO_BE_REPLACED

The Day of the Dead  IS NOT the Mexican version of Halloween. Mexicans have celebrated the Day of the Dead since the year 1800 B.C.     It is not scary or morbid. There are no pictures END_OF_DOCUMENT_TOKEN_TO_BE_REPLACED