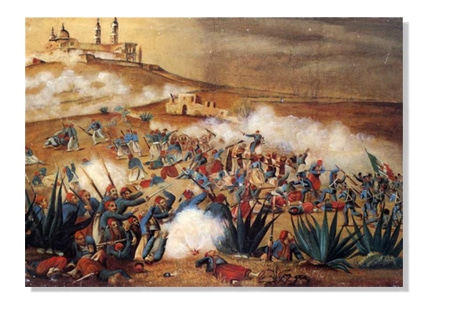 2.   Cinco de Mayo is celebrated every May 5 to observe the Battle of Puebla in 1862. Independence Day is  September 16.

3.   The Battle of Puebla took place in the State of Puebla.

4.   Benito Juarez was Mexico’s President at that time.

6.   Due to ongoing political unrest caused by many groups struggling for power, Mexico was not able to pay back its loans.

7.   On July 17, 1861 President Juarez issued a moratorium; all-foreign debt payments would be suspended for two years after which, payments would resume.

8.   The French invaded Mexico pursuing not only money but also land rights as payment for their loans.

9.   Benito Juarez sent General Ignacio Zaragoza to fortify the City of Puebla and repel the French invaders, which he did successfully.

10.       With the help of the Mexican Conservative party, Napoleon III imposed Maximilian of Hapsburg as Mexico’s emperor in 1864.

11.        Benito Juarez slowly regained power and in 1867 finally entered Mexico City where he installed a legitimate government and reorganized his administration.

Las Mañanitas is the traditional Mexican birthday song. It is so popular that it is now sung in most Latin American countries.  Usually this beautiful song is sung when the birthday person wakes up or before blowing the candles on the END_OF_DOCUMENT_TOKEN_TO_BE_REPLACED

Benito Juarez is undoubtedly one of the most important and revered figures in Mexican history. Each March 21st marks the anniversary of his birth and every elementary school in the country commemorates the man who consolidated the nation as a END_OF_DOCUMENT_TOKEN_TO_BE_REPLACED

On November 20, 2011 Mexico celebrated the Centennial Anniversary of its Revolution. On this date, in the year 1910 the revolutionary war to overthrow the dictator Porfirio Díaz, began. General Porfirio Díaz had been an important military figure during the wars against the foreign END_OF_DOCUMENT_TOKEN_TO_BE_REPLACED