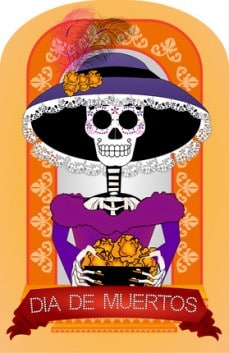 ________________________________________
This year I am going to start the kids off making offertory cans, decorated with the traditional decorations, skeletons, feathers, bright paper, etc.. then, we are going to sell the Golletes after mass to fill our cans with money, then as we collect the offerings we will use the money to adopt (child for child) a child through the Christian foundation for children and aging (www.cfcausa.org). When we have our party on Nov. 1st we will place the photo of our child on the can, the children can continue their offerings at home, and at bake sales, of course when we have our party and celebrate Los Angelitos, we will make our connection, with helping living children, and at the same time, recognizing young children who have died, respecting and remembering the past, yet, helping to create a brighter future for those less fortunate who are alive. I cant wait!!!
Christina White

________________________________________
This year for the celebration of the Day of the Dead, the local college, Longwood College here in Farmville, VA., decided to open its doors to the Hispanic population by commemorating the Day of the Dead.
I was called by a representative of the college and asked how we would like to participate. My Spanish I and II students went to the library and did research of the holiday and Halloween. They found poems and short stories written on the celebration, they learned the vocabulary and special recipes associated with the event and presented their information to the class. On that weekend, some of my students and I met at the Longwood Visual Arts Center to participate in the events there. There was an alter there created by another school system which was covered with flowers and poems written in spanish dedicated to the victims of the September 11th attack. It was very beautiful and fitting. There were different stations set up where the students could decorate a calavera, they could do drawings of calveras and esqueletos, they could make flores from paper to place on the altar.
There were many members from the community who spoke spanish which provided them with the opportunity to speak the target language. There was plenty of music and drink. The students really did have a great time.
Depending on the level of spanish that I teach next year, I would like to set up an altar in class and see how the students react to it.
Wendy Lyle-Jones

________________________________________
We spend a week studying and discussing the customs of the Days of the Dead. I give students a list of basic vocabulary words to learn, and we explore various websites using a SmartBoard so that the whole class can see the pictures of calaveras, papel picado, etc. in color. One day after school I have volunteers stay to help make sugar skulls. They are raffled off in each class during a Day of the Dead party, which we have on Nov. 2. One day during the week, we talk specifically about the ofrenda. There is a website with pictures and explanations which we look at together, and I bring in items which I might put on an ofrenda to honor my deceased father, explaining each item’s significance to the class. Then, they are assigned to write an essay (in English), in which they describe an ofrenda which they would dedicate to a person who has been important in their lives (living or deceased) and what three items they would include on an altar to honor that person and why. The essays are usually beautiful tributes to people in the students’ lives. Most are written about parents or grandparents. Because of the timing of the assignment, I usually have them in time for parent conference day. I always suggest to the students that they share their essays with the person they wrote about, if that person is still living, since they might not think to say those things in person. It’s a good week.

My students research for information on the Day of the Dead. We have a class discussion and make a vocabulary list of the
items that people use to decorate with, either at the gravesite or in the homes, as on an altar. I then ask the students to think of someone they would like to honor and ask them to bring a photo and small memorabilia. They then bring shoe boxes, which they cover with either construction paper or tissue paper. I teach them how to make paper flowers out of
tissue paper or crepe paper streamers and Ojos de Dios. They can put these items in their “Memory Box” along with the pic-
ture and other small personal items. The boxes are then put on display for Nov. 1 and 2. The class has a celebration
with Pan de los Muertos and other special dishes. Each student then shares his box with the rest of the class. I also invite other students and teachers from the school to come and see our dis-
play.

________________________________________
Hi! I’m a Mexican teacher, so I have some suggestions.
if you want to have a day of the dead offering with your students you should consider:
The presence of the four basic elements: water, earth, wind and fire. No offering can be complete if one of those elements is missing, and their symbolic representation is a fundamental part of the offering.
for example: Water, the fountain of life, is put in a glass so that those who come thirsty can relieve their thirst after a long journey. Bread, made with products of the earth, is there to satisfy their hunger.
Wind, which moves the colored papel picado that decorates and brings happiness to the table. Fire, which purifies everything and for this occasion comes in the form of a candle that is lit in their name so that we can invoke our dearly departed.
Later, comes the banquet, with all its specially prepared delicacies, the most splendorous part of all the party. Depending on the resources and the geographical zone, there are tamales and buñuelos, coffee and atole, beans and corundas, mole and enchiladas
— all the food that the visiting loved one once enjoyed. It is a must to serve the food while it’s hot so that it puts off a stronger aroma.
Other key items are the picture of grandma, uncle’s hat, the rattle that the baby never played with. Sugar calaveras or sugar skulls with the deceased’s name on the forehead, and little pumpkins are all typical of this time of year. Images of saints are also
present to guide and accompany our beloved back to their new home.

One week before October 31st students color and cut calaveras puppets; during language arts they write a rhyme about their own calacas; the calacas are placed next to their rhyme and with construction paper as background. We hang them from the classroom’s ceiling so children can see the final product. Students eat pan de muerto and taste atole made by the teacher; We set up our altar in preparation for the angelitos with ofrendas, one day before the 31st. The next day is a preparation to welcome the adult souls. It is important that students understand this is a religious and social “tradition” celebrated mostly in the southern mexican regions.
Marilu Rice

I read a short version of Don Juan Tenorio and have student-actors pantomime the actions. I allow them to dress up for the parts. It is great fun!

I also allow my students to make traditional recipes for bonus points. We had a great treat of calabaza en tacha and pan de muertos.
Maureen Hoffman-Wehmeier

My students cut out skelton theme papel picado banners and we sting them around the room.

I also construct a large Ofrenda and place it in front of the room on Nov 2nd.
and teach with the lights off. Students may wish to bring in a photo of a decreased love one to place on the altar.

The Foreign Candy Co. has some skull suckers made in Mexico. They are grape and strawberry favors. They are also available now at Walmart in the grocery section. They students love them!!

I also have a couple of students to made Panes de Muertos and bring them to class. I bring milk and the students sample the bread. Some of them love it, but some don’t!

I also decorate my room with commercially made skeleton items. Check for them after Halloween!!

Some years my student made papier mache skulls using a balloon as a base. They paint them and decorate them as they wish. We hang them from the classroom ceiling. You may want them to make them at home since it can be messy!

This year, my students are purchasing Day of the Dead T-Shirts to wear all day on Nov 2nd. We are using black shirts with a white Catrina Skull on the front with the logo El Dia de los Muertos above her head and “el 2 de Noviembre” beneath her. If you check around, you can get these for about $6.25, if you have a local silk screen shop. If you don’t want to purchase them, have your students to make them own and have a contest!

Hope some of my ideas help you in planning your Dia de los Muertos activities.

I make ground rules such as no WWF, nothing Satanic, nothing evil. I ask my colleagues to judge the masks, and give bonus points for most original, funniest, scariest, etc.

I also have a paper folding exercise where I give the directions in Spanish, and they fold and cut on the lines. The end result is a skeleton paper chain. The folding instructions in English come from the book, Un Poco de Todo.

________________________________________
Along with studying the holiday customs, learning a short Day of the Dead vocabulary list and making bread, I do the following projects. In Spanish I, each student makes a paper “calavera” which is decorated and has the student’s name on the forehead.
For a number of years now I have had my Spanish II classes make shadow boxes like the ones you can buy in the Mexican markets. The class divides up into groups (2 – 3 per group). Each group chooses a theme (skeleton teachers, skeletons at the beach, etc.), brings in a shoe box and creates the shadow box with colored paper, etc. They can use other materials that they bring in if they want. The kids really get creative. I display them in the display case near my room and the students vote on their favorite. I generally bring in some sort of theme-related prize (skeleton suckers,
etc.). It’s a fun project for the kids as well as a break for me Spanish III makes actual sugar calaveras. I purchased the molds for last school year. The kids loved it!

________________________
Construct an all-school or in-class altar. Dedicate it each year to a famous Hispanic. Last year, we studied the life and art of Diego Rivera. This year we will study and dedicate the altar to Frida Kahlo.

Ofrendas are an essential part of the Day of the Dead celebrations. The word ofrenda means offering in Spanish. They are also called altares or altars, but they are not for worship.   Some people mistakenly think that Mexicans that set up ofrendas for their defunct END_OF_DOCUMENT_TOKEN_TO_BE_REPLACED

This beautiful legend recounts the love story of two young Aztecs,  Xóchitl and Huitzilin, a romance from which the cempasuchil flower was born. This wonderful love story began when the two young Aztecs were still little. They used to spend all their spare time END_OF_DOCUMENT_TOKEN_TO_BE_REPLACED