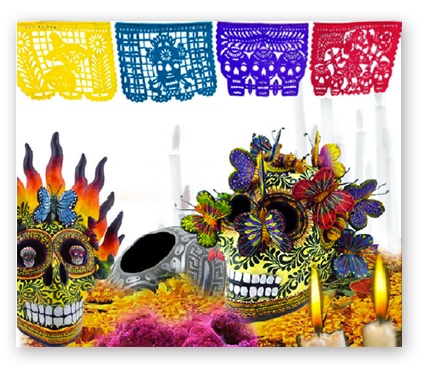 From the beginning of time, man has felt the need to explain the mystery of life and death. Many civilizations and cultures have created rituals to try and give meaning to human existence.

· Where do we come from? 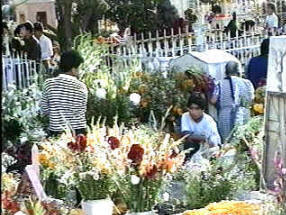 · Why does life end?
· Is there “life” after death?
· If so, what kind of “life”?
· Can we do something while alive so we can enjoy “life” after death?
These are some of the questions man has asked himself in order to understand our finite existence on this earth.

To the indigenous peoples of Mexico, death was considered the passage to a new life and so the deceased were buried with many of their personal objects, which they would need in the hereafter. Many times even their pets were sacrificed so they would accompany their masters on their long journey.

From pre Columbian times, El Día de los Muertos, the Day of the Dead has been celebrated in Mexico, and other Latin countries. This is a very special ritual, since it is the day in which the living remember their departed relatives. Sometimes, when people of other cultures hear for the first time about the celebration of the Day of the Dead, they mistakenly think it must be: gruesome, terrifying, scary, ugly and sad. Nothing further from the truth, Day of the Dead is a beautiful ritual in which Mexicans happily and lovingly remember their loved relatives that have died. Much like when we go to a graveyard to leave some lovely flowers on a tomb of a relative 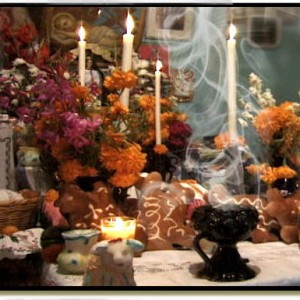 Las Mañanitas is the traditional Mexican birthday song. It is so popular that it is now sung in most Latin American countries.  Usually this beautiful song is sung when the birthday person wakes up or before blowing the candles on the END_OF_DOCUMENT_TOKEN_TO_BE_REPLACED

Ofrendas are an essential part of the Day of the Dead celebrations. The word ofrenda means offering in Spanish. They are also called altares or altars, but they are not for worship.   Some people mistakenly think that Mexicans that set up ofrendas for their defunct END_OF_DOCUMENT_TOKEN_TO_BE_REPLACED

This beautiful legend recounts the love story of two young Aztecs,  Xóchitl and Huitzilin, a romance from which the cempasuchil flower was born. This wonderful love story began when the two young Aztecs were still little. They used to spend all their spare time END_OF_DOCUMENT_TOKEN_TO_BE_REPLACED

The Day of the Dead  IS NOT the Mexican version of Halloween. Mexicans have celebrated the Day of the Dead since the year 1800 B.C.     It is not scary or morbid. There are no pictures END_OF_DOCUMENT_TOKEN_TO_BE_REPLACED