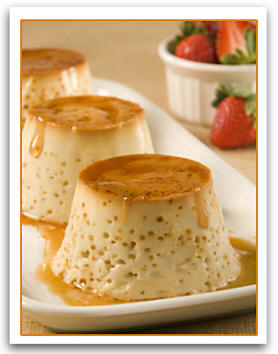 The word Flan comes from the old French flaon, which means custard.  The history of Mexico’s  famous dessert goes back to ancient Rome, where domesticated chicken produced too many eggs which then were used to make custard. The Spaniards, when they conquered what is now Mexico, introduced many foods and ingredients. Flan was one of them.

This is one of Mexico’s favorite desserts. It can be made in a single large mold or in individual custard cups.  The bottom of the molds are caramelized so that when the dessert is unmolded it is covered with the caramel glaze.

In a small pan over medium heat boil ½ cup sugar with 2 tablespoons of water. Stir constantly until sugar dissolves and turns dark brown.  Pour caramel into the mold, turning it so it covers the bottom. (If using custard molds you can do the same to caramelize them).