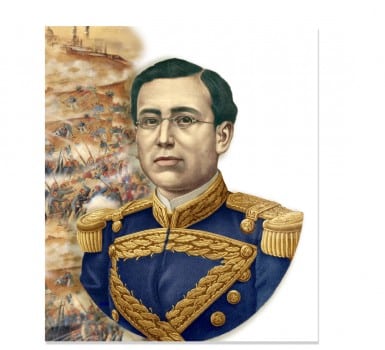 Along with 100 followers, he took up arms to defend the liberal cause, a cause that he would not abandon until his death.
In 1860, he fought in favor of the Constitution of 1857. He also participated in the battle of Calpulalpan, facing the conservative forces. In this battle, easily won thanks to a brave counterattack, the liberals ended the War of Reform and laid down the foundations of a new republican system.

During the term of Benito Juarez, Zaragoza was recognized for his high sense of loyalty and patriotism. Thus, he served his country as Minister of the Army and Navy, a position that he held until 1861.

But the most remarkable passage in the life of this military man was when the fledgling Republic of Mexico, financially drowning due to all of its debts and war expenses, decided, through the person of Benito Juarez, to decree a moratorium to suspend all foreign debt payments.

Faced with this scenario; Spain, France and Britain, countries to whom the majority of the debt was owed, became dissatisfied and made up a tripartite alliance whose armed forces reached the port of Veracruz.

After further negotiations, Spain and England decided to retreat, but France, in a frank desire to build a new imperial government and extend its American colonies, decided to continue its foray into Mexican territory.