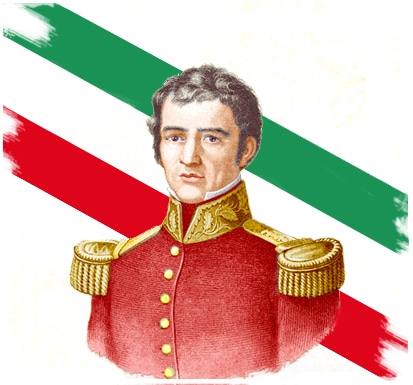 Jose Miguel Ramon Adaucto Fernández Félix, better known as Guadalupe Victoria, was born in Tamazula, Nueva Vizcaya, currently the state of Durango in 1786. At a very young age he was left an orphan, leaving his uncle, Augustin Fernandez, to take care of him.

Since his uncle took custody of  Guadalupe Victoria he studied at the Seminary in Durango and later in Mexico City at the Colegio de San Ildefonso where he studied law. Eventually he abandoned law to join the war of independence.

In 1812 he was part of the insurgent group of Hermenegildo Galeana and changed his name to Guadalupe Victoria due to the fact that he entrusted himself to the Virgin of Guadalupe, and “Victoria” for his desire to succeed in a victory in the fight for independence.

Guadalupe excelled in the takings of Oaxaca and Veracruz, where he joined the ranks of Nicolas Bravo who was under the command of Jose Maria Morelos. Seeing how important the military journey was through the Puente del Rey, he devoted himself to halting them and due to his successful assaults on military convoys he was recognized as a leader and strategist of independence.

Due to his success, he was promoted to colonel and was in charge of the campaign of Veracruz.

He defended the ports of Boquillas de Piedras and Nautla, although the royalists managed retrieval. Guadalupe Victoria then enacted a successful strategy of guerrilla warfare, with brief but devastating attacks.

He also organized in the territory that the insurgents dominated, fixed taxes, appointed judges and established conditions to create a maritime force. He was able to successfuly isolate and besiege the cities of Orizaba, Córdoba, and Jalapa.

After the death of Jose Maria Morelos, Guadalupe Victoria continued with the insurgent movement. He went into hiding at the beginning of 1819 and reappeared in 1821 to support the Plan of Iguala that was signed by Vicente Guerrero and Agustin de Iturbide.

Although initially he supported the first independent government of Mexico under  the Mexican Emperor Agustin de Iturbide, Guadalupe Victoria joined those who were opposed to this government because of the elimination of the Constituent Congress and the lack of government inculsion of any insurgent leaders.

Once Iturbide resigned in 1823 and went into exile, Victoria became part of the Supreme Executive Power. A year later Mexico adopted the Constitution of 1824, also known as the Constitutive Act of the Federation with which Victoria was elected as president.

On the day of his inaguration, the First President of Mexico said: “Independence will be protected with my blood, and freedom will be lost with my life!”

He focused his presidency on getting other nations to recognize Mexico as an independent country. He obtained a loan from England, who helped to expell Spain from Mexico. He creted the Merchant Navy to stimulate international trade.

The two biggest successes of his presidency were the establishment public finances and the abolition of slavery, which was declared on 16 September 1825, when the Grito de Dolores was celebrated for the first time.

In 1829 at the conclusion of his presidency, he went to live in his estate in Jobo, Veracruz.

He was a senator of Veracruz and Durango from 1832 to 1834 and at the same time fought rebellions in Oaxaca and Veracruz and later was appointed acting governor of Puebla. In 1838 before threat of war with France arose, he took over the general command of Veracruz.

In 1841 he married Maria Antonia Breton y Velázquez but did not have the opportunity to enjoy his marriage because of his sudden death in 1843 at age 56 due to epilepsy.

On 8 April 1843 his name was inscribed on the wall of Honor at the Chamber of Deputies of Mexico.

Currently his remains can be found within the Monument of Independence for having throughly served his country.

Las Mañanitas is the traditional Mexican birthday song. It is so popular that it is now sung in most Latin American countries.  Usually this beautiful song is sung when the birthday person wakes up or before blowing the candles on the END_OF_DOCUMENT_TOKEN_TO_BE_REPLACED

Benito Juarez is undoubtedly one of the most important and revered figures in Mexican history. Each March 21st marks the anniversary of his birth and every elementary school in the country commemorates the man who consolidated the nation as a END_OF_DOCUMENT_TOKEN_TO_BE_REPLACED