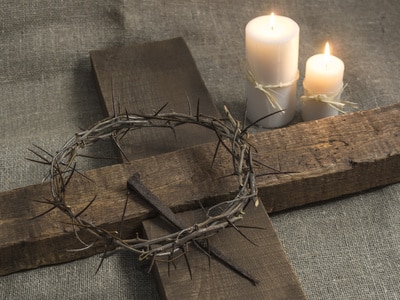 Oswaldo Ortega Palma, is a young man who played the role of Jesus in the Passion Play of Iztapalapa

The most important and most difficult role to play in the Passion of Jesus which is presented in the district of Iztapalapa, is that of Jesus Christ.
It is a great honor for any young man in the district to be chosen for this complex role, but also a great responsibility, since the whole staging of the play centers on him.

Physically, it is very demanding. Very early on Good Friday, the young man has to bear the lashes meted out by the “Romans”; a crown of thorns is placed on his head and he has to carry a 220 pound wooden cross along a route of several kilometers.

Finally, after climbing the Estrella hill, he is crucified – he is not actually crucified, he’s bound with ropes -, before the eyes of millions of spectators.

Let’s find out a bit more about this young man, endowed with such great physical and spiritual strength.
*What’s your name?
Oswaldo Ortega Palma.
*How old are you?
Eighteen.
*Is this the first time you have played the role of Jesus?
Yes, it’s the first time, although I played a Nazarene for five years, and a Roman for three.
*Who are the Nazarenes?

Everyone can take part as a Nazarene; you only have to wear a brown tunic and a crown of thorns with yellow flowers. Everyone’s responsible for getting the Nazarene costume and the cross to carry along the route, through the streets of Iztapalapa. All the Nazarenes are men, of different ages, from boys to old people, and they do it as an offering to God, or to keep a promise they have made to God.
*How did you become interested in participating in the Iztapalapa play?

Las Mañanitas is the traditional Mexican birthday song. It is so popular that it is now sung in most Latin American countries.  Usually this beautiful song is sung when the birthday person wakes up or before blowing the candles on the END_OF_DOCUMENT_TOKEN_TO_BE_REPLACED

The passion play of Iztapalapa is one of the most popular and one of the biggest, most important religious celebrations in Mexico and in the world. In just one day, more than a million visitors come to a small END_OF_DOCUMENT_TOKEN_TO_BE_REPLACED

Oswaldo Ortega Palma, is a young man who played the role of Jesus Christ in the Passion Play of Iztapalapa The most important and most difficult role to play in the Passion of Jesus which is presented in the district END_OF_DOCUMENT_TOKEN_TO_BE_REPLACED