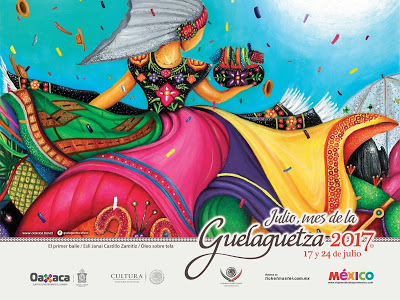 The most important festival in Oaxaca is undoubtedly the annual celebration of  La Guelaguetza. It is a holiday that revolves around dance and brings together eight regions of Oaxaca on the Cerro del Fortin.

Each year the Guelaguetza is celebrated on the two  Mondays following July 16.

Guelaguetza means to give or share, to gift or offer a service to someone. It comes from the Zapotec word   Guendalezaa, which means offering, gift.

When a person marries, has a christening, a funeral or any kind of celebration, the people that are invited traditionally gift food, beverages, their work and even cash.

The hosts take note of exactly what and who gifted them in order to “re-pay” the favor in the future.

This wonderful exchange creates very strong bonds between families and the community.

Since the Guelaguetza takes place at the top of the Fortin hill in addition to the wonderful music and dances there is a spectacular view of Oaxaca and its surroundings, this is why it is also known as Lunes del Cerro, Mondays at the Hill.

Through their music, songs, their dances and traditional attire, each region presents to the spectator a fabulous testimony of their rich traditions and cultural heritage.

At the end of the presentations food, handicrafts, sombreros among other things are given away to the public.

The traditional dances performed by region are:

Each of these participating regions brings their own musical bands and dancers.

La Guelaguetza, is one of the most important traditional, cultural and artistic expressions of Oaxaca.

It is no wonder that it is able to bring together people from all over the world that want to experience one of the most fabulous reflections of its rich cultural heritage. 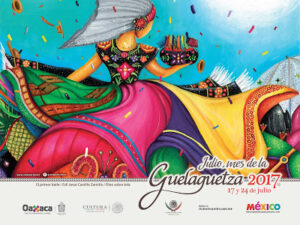 Las Mañanitas is the traditional Mexican birthday song. It is so popular that it is now sung in most Latin American countries.  Usually this beautiful song is sung when the birthday person wakes up or before blowing the candles on the END_OF_DOCUMENT_TOKEN_TO_BE_REPLACED

The artistic process and techniques used in the creation of these captivating  wooden Alebrijes. Alebrijes are carved wooden figures created by Oaxacan artisans. They have become so popular that even the world’s most respected Spanish language authority, the La Real Academia de END_OF_DOCUMENT_TOKEN_TO_BE_REPLACED

Oaxaca occupies a fundamental place in the universe of Mesoamerican civilizations.  It is the point of encounter between the Nahuan towns of the central plateau, the Mayans of the Yucatan Peninsula, and the ancient inhabitants off the coast of END_OF_DOCUMENT_TOKEN_TO_BE_REPLACED