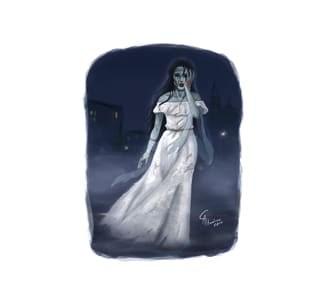 In the book; “Vision of the Conquered”, by Ángel María Garibay, the author collects the forebodings that the Mexicas– the pre-Hispanic Mexican empire–received from their gods before the arrival of the Spaniards.

One of these omens makes reference to a woman; “La Cihuacoatl” or serpent-woman, that wandered about the the broad streets of the Great Tenochtitlan wailing and lamenting: “My dearly beloved children; your departure is near; we’re about to become estranged! Oh, my children! Where shall I take you?”

Curiously, the echo of La Cihuacoatl was disseminated with the conquest of the Spaniards and every region was fused together by the image of various feminine deities:

Auicanime, “the needy one; the thirsty one”, the goddess of hunger of the Michoacan Tarascans; Xtabai, the goddess of suicide according to the Mayans of the Yucatan Peninsula;Xonaxi Queculla; “the red-fleshed lady”, the deity of death, of the underworld and of lust among the Zapotec people of  Oaxaca[1].

And, of course, the “colonial” version also ensued, that of a young and lovely woman who, having been rejected by the man she loved, drowned her children and then committed suicide. Upon arriving at the gates of Heaven, God asked her about her children and she answered, I know not, my Lord”, so she was sent back to find them.

And that’s how the poor woman spent the centuries comprising the Colony, the Independence years and the Revolution; searching for her children down the railroad tracks, up in the branches of the trees, under bridges and among the ruins of the haciendas… The Mexican writer, Carmen Toscano, described how she terrified the inhabitants of New Spain in “La Llorona” (1959):

“- They say  that she wails  her most mournful scream upon arriving at the Main Plaza, that she kneels down there…and, turning to the elders of the Indians, kisses the ground and cries out in anguish; completely full of affliction.

–        Nevertheless, she must have suffered a lot, the poor woman…why can’t she rest after so much time?”

Today, Mexico City, where her legend was born, has a different pace and its sounds are overwhelming, even in the wee hours of the night.

Children aren’t so gullible and grandparents don’t tell as many tales as before. This Mexico has really changed in five centuries.

But in nearby places, where the night still inspires fear, there are still those who get home with racing hearts and a pale countenance, those who tell their folk with a whisper, “The thing is; I heard La Llorona”.