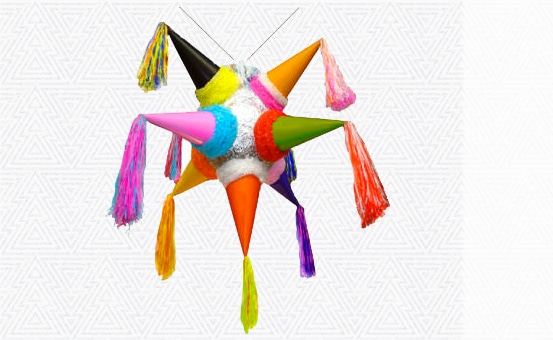 When the first missionaries arrived in Mexico, they were faced with a very different way of life than the one they were used to.  The conquest meant not only taking over territories that had recently been discovered as America, but it was also the imposition of a language, Spanish customs and habits and, among other things, religion.

It was not easy for the evangelists to change the entire belief in many gods ideology of the many different Indian populations, so they had to invent strategies that they could use to teach the mysteries of God to the Indians.

One of the most complicated dogmas was sin and the way in which Satan tempts us.  The missionaries had to teach them about how we must be strong to beat the Devil;  that’s how we reap the benefits of heaven…how complicated!!!

And with the huge weight of responsibility on their shoulders, the Franciscans found the answer…a piñata! 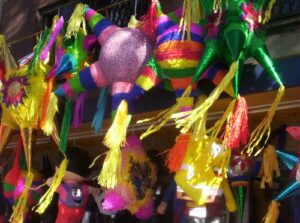 They designed a huge ceramic pot covered with colored paper in the shape of a star, where each one of the points represented one of the seven deadly sins.  It was something that would come down from and then rise up to the sky (hence the shape of the star) and it would bother people…touch them…tempt them!

So, you have to hit it hard, overcome the temptation, break the evil, put all your attention into getting rid of evil.  But it’s not easy!  Sin blinds us with a blindfold, and our family and friends and others who surround us are the ones who have to guide us in order to break the chain of evil.

And when someone is well guided, the piñata is broken!  Then, from heaven, we are showered with gifts…fruit, candy, toys, immense happiness that fills us with joy.  Evil has been destroyed, God is with us, the missionaries have accomplished their duty and we Mexicans enjoy one of our most fun and exciting traditions.

Las Mañanitas is the traditional Mexican birthday song. It is so popular that it is now sung in most Latin American countries.  Usually this beautiful song is sung when the birthday person wakes up or before blowing the candles on the END_OF_DOCUMENT_TOKEN_TO_BE_REPLACED

Sugar Skulls are one of the most popular and iconic symbols of the Day of the Dead Celebration.  When the Day of the Dead festivities approach, one can find sugar skulls being sold nearly everywhere; in traditional markets, stores,  and street END_OF_DOCUMENT_TOKEN_TO_BE_REPLACED