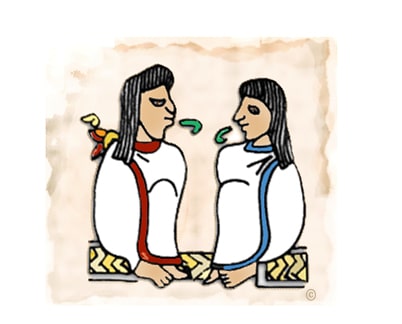 by Angie Galicia
Courage and a clear ideal are the true essence of an invincible army; this was demonstrated by the inhabitants of the city of Puebla on May 5, 1862.
That day, faced with an invasion by the French, a small army commanded by Ignacio Zaragoza saw its troops augmented with the participation of the Zacapoaxtlas, natives of the Puebla region. They went to help Zaragoza without arms, hungry, without any idea about military strategies, but determined that no one – not even the invincible army of that time – would take their freedom from them.

Victory, no matter how short, transcended the boundaries of the city, and even of the country, in fact, it went beyond the limits of time, and became a tradition. Timoteo Rodríguez, a native of Zacapoaxtla, together with Iziquio Cedillo and Demetrio Flores, decided in 1928 to commemorate this battle, in which their forbearers had participated. Since then, a representation is held every May 5th on the hill known asPeñón de los Baños, in Mexico City.

Fidel Rodríguez, Timoteo’s relative, and the current organizer of the event, gave an interview in which he told us about this tradition. In the shade of a tree, on the slope of El Peñon where he lives, he explained that this is a very important commemoration for him:

“..It’s about keeping people aware of events that marked our history, of reliving the event so as not to forget it.”

– How long have you been in charge of organizing this popular event?

– Since 1997, when my father died, because this is a hereditary office. But I have been involved in it since I was six, reciting poems.

– Who are the people who act in this presentation?

– Right now, the Contingent of Zacapoaxtlas, the French Army Contingent  and the Army of Ignacio Zaragoza, the Mexico City Association of “Charros”A, the schools in the district, theVenustiano Carranza “delegación” – a county in Mexico City, the fire department, and a small, civil protection association.

– Fidel, why does this tradition begin at Peñón de los Baños?

– Well, you see, apart from the fact that  this was where my ancestors came to live, it is a mystical hill. According to legend, it was here where Huitzilihuitl, the Aztecs’ guide, killed Culhuacano and threw his heart into what was then the Texcoco lake. The red prickly pear originated here, and it was on one of those cactus plants that the eagle landed and devoured a snake. So the Ramírez Codex says; in fact, there are some archeological zones here… So as you will understand, this place has a very special meaning, and in the past it was perfect for acting out the battle.

– Well, no… There are a lot of problems in using the gunpowder; (the authorities) also restrict us, the streets, the subway, the airport … there are a lot of factors, but even so, our tradition goes on, and it will continue to go on.

– How long does it take you to organize the event?

The organization starts on May 6, the day after we finish the presentation; that is, it lasts all year. But we put out a call to people who want to take place, about three months before, so rehearsals can begin, the roles decided, and the dialogue memorized.

We calculate the expenses, hire bands, buy the gun powder and get approval for it from the Department of National defense. We also ask for permission from the county, and – very important – we start collecting for all the expenses involved.

– What happens in this celebration, how does it start and end?

– The “fiesta” itself begins on May 3 with the celebration of Holy Cross Day. El Peñón de los Baños is famous as the home of a great number of construction workers, masons. So that is also a very important day for us.

The cross is raised and is taken up there, to the highest crag. Up there, the construction workers who are out of work pray for God to give them a job and then there is a get together for everyone, given by the sponsor, of course.

May 4th is the Eve of the commemoration. In the afternoon, my father used to call on all the neighbors. He would ask them:
“Are you ready?   Will you be there?”
This makes the tradition less formal, more brotherly.

On the 5 th , at eight in the morning, we all get together at the Hermenegildo Galeana school. There, we salute the flag, recite poems, and the story is told of  the Battle of 1862 in Puebla .

Around nine o’clock, the parade starts and we reach the Niño Quemado Park. The first staging takes place here: a very short skirmish.  Then everyone goes home for lunch.

An hour and a half later, we gather again in the park, and the dialogue between those representing the French and the person who plays General Zaragoza takes place.

Then the Treaties of Loreto and Guadalupe are signed, and war is declared.

The first shots begin on the hill and the battle lasts about an hour.

– Are there any wounded?

– Unfortunately, there are. The truth is that this has become a part of the celebration, and it’s normal, because they use machetes and gun powder…

– What happens after the battle?

– Mexico’s victory is declared and in a symbolic act, all the French are “shot by firing squad”. Thefiesta ends in a great dance, attended by the whole community.

– What is the women’s part in the celebration?

– I am very happy to have the women’s participation; they are very enthusiastic. Although in the past they were not allowed to participate because it was thought that they “got in the way”, today they play a very important role: they wear the skirts of that era, and take part in the acting.     Maybe a women’s flute band will be formed this time, and I think it will be well accepted by the women. They have shown a lot of interest, and are very creative; they contribute excellent ideas.

– What other activities are there, besides the staging of the Battle of May 5th?

– Well, about two years ago, a mural was painted showing the history of Peñón, and the main topic is the performance of what happened on May 5. We are also trying  not to make the tradition a reason for conflict, and the people of San Juan de Aragón and of Mezquiyapa are invited to participate; there has already been a good response.

A personal project is that I began to put pictures and documents together that some day may be used for a good book on the history of Peñón. I think this is a way of leaving evidence, more than of myself, of the land where I live…

In saying goodbye, Fidel graciously offered to show us the mural, which takes up the entire wall of a house very close to his own.

In shades of blue, in the background, are the Popocatépetl and Iztaccíhuatl volcanoes; the forts ofLoreto and Guadalupe, and the three districts: San Juan de Aragón, Mezquiyapa and Peñón de los Baños. On the right, the impressive Huitzilihuitl or huitzilopochtli holds a human heart. And in the center, the town in costume, carries out its ancestral tradition. Timoteo’s great-uncle and father also appear, holding a lively conversation.

Fidel said a cordial goodbye, and told us that for him, it would be a triumph if his town’s tradition were attended by “some ‘güeritos‘  (“blond ones” Americans) interested in what goes on there. We hope this will happen soon.