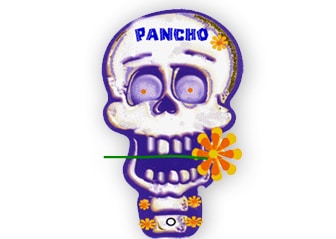 Click on the pictures to enlarge. Then print each one.

Cut the parts of the skeleton.

Punch holes where directed, and join the head, arms, hands, legs and feet.

Join together and fasten with thread passed through the holes and knotted on both sides.

Las Mañanitas is the traditional Mexican birthday song. It is so popular that it is now sung in most Latin American countries.  Usually this beautiful song is sung when the birthday person wakes up or before blowing the candles on the END_OF_DOCUMENT_TOKEN_TO_BE_REPLACED

Ofrendas are an essential part of the Day of the Dead celebrations. The word ofrenda means offering in Spanish. They are also called altares or altars, but they are not for worship.   Some people mistakenly think that Mexicans that set up ofrendas for their defunct END_OF_DOCUMENT_TOKEN_TO_BE_REPLACED

This beautiful legend recounts the love story of two young Aztecs,  Xóchitl and Huitzilin, a romance from which the cempasuchil flower was born. This wonderful love story began when the two young Aztecs were still little. They used to spend all their spare time END_OF_DOCUMENT_TOKEN_TO_BE_REPLACED

Day of the Dead: Celebration, History & Origins From the beginning of time, man has felt the need to explain the mystery of life and death. Many civilizations and cultures have created rituals to try and give meaning to human END_OF_DOCUMENT_TOKEN_TO_BE_REPLACED