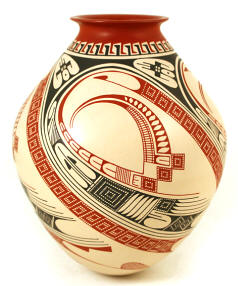 Why is it said that in a small, lost town of Chihuahua, Mexico exists the largest concentration of artists on the face of this earth?

Why are some of the contemporary works of art that are created in this little town sold for incredibly high prices on the international market?

Why are thousands of tourists from the United States, Europe and Japan, as well as other parts of the world, coming to this place?

Why have I heard many people say that since they became familiar with these works of art, their lives have never been the same? 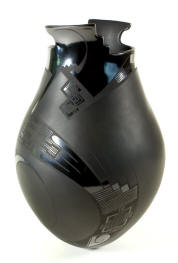 ¿Sabías Que… Did you know that the woodcarvers from Oaxaca have an ecological program to conserve theircopalillo trees?

THE STORY OF MATA ORTIZ

Twelve-year-old Juan Quezada had abandoned school to work in the fields and make his contribution to the low family economy.  His surroundings were the same as they had been 600 years ago for the members of a sophisticated culture called “Casas Grandes“, who erected the city of Paquimé, evolved and then inexplicably disappeared.

Over the ruins of that lost civilization was built a poor, dusty town, lacking in everything, named Juan Mata Ortiz.  There, little Juan Quezada, always reserved and alone, began to gather firewood.  On his adventures, he used to find the remains of ceramic which served as testimony to the artistic level reached by the inhabitants of ancient Paquimé.  Their designs and forms caught Juan’s attention, and through extraordinary intuition, Juan began to reproduce the techniques used hundreds of years ago. Juan did not work alone. There were several friends working together, their discoveries about pottery making. They were the legendary Felix Ortiz, Rojelio Silveira, and Emeterio Ortiz.

Together they kept the ceramic shards, examining them over and over again.  It soon occurred to them that the materials used to make these pieces of art had to be close to where he was, and sure enough, he was able to combine the right amounts of different clays found in the mountains near Mata Ortiz. they also experimented with different materials to make the pigments he was going to need.

Eventually with their hands, serrated knives, and their ability, they learned to give a uniform thickness to the walls of the earthenware vessels.  He worked on those ornamental designs by using drawings that he would trace in a symmetrical 180-degree form.  These drawings were very similar to the drawings that he had seen in the pre-Columbian ceramics. They invented their own technique of firing the pieces, using cow manure as combustible. To protect their pieces from direct fire, they would cover them with cans or ceramic flower pots, which they would place over rocks so that the hot air would circulate.

They never realized the magnitude of their accomplishments, and everything indicated that they would go unnoticed by the world.  However, the greatest stories are often woven with chance opportunities.  Juan finally gave several of his pots to some salesmen who in turn took them to the United States.  There, they exchanged them for clothing in a junk store in Deming, New Mexico – Bob’s Swap Shop.  And that’s how the other protagonist of this story appeared: Spencer MacCallum, an American anthropologist, with a specialty in Art History, who liked to go to browse through those stores.

There, they exchanged them for clothing in a junk store in Deming, New Mexico – Bob’s Swap Shop.  And that’s how the other protagonist of this story appeared: Spencer MacCallum, an American anthropologist, with a specialty in Art History, who liked to go to browse through those stores.

When Spencer entered Bob’s Swap Shop and saw the pots, he couldn’t help but to buy them.  Once he got home, he observed them time and again, admiring their beauty, the perfection of their design and almost unearthly symmetry.  Spencer couldn’t stop thinking that somewhere in the world existed an extraordinary artist, whose works of art were being sold in modest swap shops.

After a month, he decided to find this unknown artist.  His search was successful.  In just a few days, Spencer found himself in front of a very surprised Juan who couldn’t believe how this American man had come all the way to this lost, dusty town called Mata Ortiz. What he found to be even more incredible, though, was the generous offer of Spencer, which said, “In exchange for a monthly stipend please dedicate yourself solely to produce art”. And note that Mr. MacCallum did not say “produce ollas, pots”, he had such confidence in Juan‘s talent that whatever he decided to create would be artistically worthwhile.

Within many magical moments in this story, this one seems to me to be the most fascinating:  the encounter of two extraordinary men, destined to change the fortune of that little town, and to leave us an artistic legacy whose reach is still unknown.

What happened after that day is no less interesting.  Due to Spencer’s promotion mainly in the southern part of the United States, Juan accomplished more and more everyday as a potter. He first taught his family, and then he taught other members of the Mata Ortiz community to work with ceramics. Today, there are 400 artists who make up this artistic movement, dedicated to pottery. Their economic level as a community has increased incredibly.

Juan Quezada has been recognized worldwide. His art has been exhibited in very important museums, and in 1999, the Mexican government awarded him with the National Art Award, the greatest recognition given to an artist in this country.

THE ART OF MATA ORTIZ

With an olla as their canvas, the potters of Mata Ortiz have imprinted in them not only re-creations of ancestral symbols, but they have searched within their own spirit and creativity and have been able to conceive a unique artistic language, creative and original.  They have passed through the imitation of pre-Hispanic ceramics, and have moved on to a refined creation of contemporary art.

It is considered to be art and not crafts because their work is not routinely elaborated with a repetitive, popular style.  The potters of Mata Ortiz combine both intellectual and aesthetic elements.  Each artist has freely looked for his or her own form of expression, his or her own language through which to communicate.

What is it that makes these ceramics a unique movement in the world of art?

*It is not an activity which has been inherited by previous generations.  Centuries had passed without there being ceramic art in this area.

*The large quantity of artists concentrated in one place.  It is incredibly intriguing that so many skilled artists could come out of such a small place.

*The diversity among the styles.  If we observe Juan Quezada’s work, along with works done by Laura Bugarini, Leonel Lopez, Macario Ortiz, Eli Navarrete and Manolo Rodriquez, what would be the common denominator of the style? How could we define the style of Mata Ortiz? Is there a particular style? I believe that what unites this artistic movement is primarily the geographic region; in second place, the clay and the pigments; thirdly, the methods or techniques which are used to create these works of art.

*The speed at which this art has evolved.  In less than 30 years the movement has gone from imitating pre-Hispanic designs to developing creativity whose expressions surprise us every day.  It is now considered that Mata Ortiz has reached its classic period.

*The need to innovate and grow artistically.  This is why the artistic evolution in Mata Ortiz has been so rapid.  The artists are not satisfied with what they have accomplished.  They are constantly searching for new languages, new natural pigments, new clay, and techniques that will make them grow as artists.

Undoubtedly the art of Mata Ortiz will continue to surprise and bewitch us for many, many years to come.

The artistic process and techniques used in the creation of these captivating  wooden Alebrijes. Alebrijes are carved wooden figures created by Oaxacan artisans. They have become so popular that even the world’s most respected Spanish language authority, the La Real Academia de END_OF_DOCUMENT_TOKEN_TO_BE_REPLACED

“A peoples’ creativity, its sensitivity and its finesse can all be appreciated through its pottery.”  Herbert Read Art Historian Since the emergence of the  Olmec  culture, considered to be the mother of the Mesoamerican cultures, ceramics, pottery making, took an important END_OF_DOCUMENT_TOKEN_TO_BE_REPLACED

I have been around clay all my life since I come from a family dedicated to the production of crafts made out of clay. As a child I was expected to help my parents because this was our livelihood. I END_OF_DOCUMENT_TOKEN_TO_BE_REPLACED