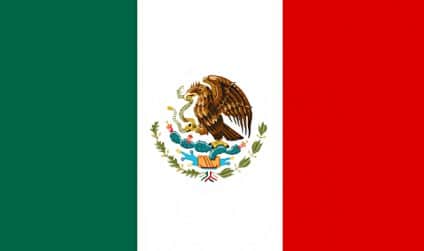 The Mexican national flag is a symbol of freedom, justice and citizenship. Its shield and colors represent the origins, principles, courage and struggle of the Mexican nation.

Over the years, different flags have represented Mexico, but the flag that was used in the Declaration of Independence, with some modifications, is the flag that currently represents Mexico.

On February 24, 1935, Benito Ramirez an employee of the Bank of Mexico, organized a guard of honor in tribute to the Flag of Mexico and this practice continued until 1940, when President Lázaro Cárdenas declared that February 24 was officially Flag Day.

From then on, every year Mexicans  honor the flag with ceremonies that commemorate the heroes who gave their life for Mexico’s freedom and independence.

The flag of Mexico, was born in 1821 when Agustín de Iturbide was inspired to represent in it the  guarantees that all Mexicans would have when the independence of Mexico was declared.

During the declaration of the Plan of Iguala, Iturbide wore a flag with three colors, white, green and red, arranged in diagonal stripes and a gold star on each color.

The rights or guarantees that Iturbide declared were reflected in the flag:  white represented the Catholic religion, which was the only religion accepted, green stood for the Independence of Mexico from Spain and red equality and unity of Mexicans with Spaniards .
When the  Trigarante Army reached  Mexico, Agustín de Iturbide carried the flag and proclaimed the independence of Mexico.

During Iturbide‘s rule as Emperor of Mexico, the flag underwent some modifications, the stripes became vertical and had a crowned eagle in the white colored center.

After the fall of Agustín de Iturbide in 1823, the Constituent Congress declared the tricolor flag as the official flag but with modifications.

The eagle was stripped of the imperial crown and it is represented with open wings; at the foot of it, placed branches of laurel and oak were placed.

The meaning of the colors also changed, white represents purity, hope is the green color and red represents the blood lost by our heroes of the Independence struggle.

Over the years and during the presidency of Porfirio Diaz, other elements of the shield were modified.

"
It was during the presidency of Gustavo Diaz Ordaz with the declaration of the Law on the Characteristics and Uses of the Coat of Arms, the Flag and the National Anthem” that the current flag was made official, through article 3 of this law.

The Flag of Mexico is divided into three segments, green, white and red respectively and in the center is the national emblem, which consists of an eagle on a cactus in the middle of a lagoon, devouring a snake.

The shield has its origins in the ancient Aztec legend about the founding of Tenochtitlan.

Article 3.- The National Flag consists of a rectangle divided into three vertical stripes of identical dimensions, with the colors in the following order from the flagpole to the right: green, white and red.

On the center of the white strip,  is the national shield, with a diameter of three-quarters of the width of this strip. The ratio between width and length of the flag is four to seven. A bow of the same colors may be placed at the top of the pole.

Christmas in Mexico — my first year in the country, I thought that was an oxymoron. How could it ever feel like Christmas here without snow on the ground; without a fire in the fireplace; without the fireplace?! Well, my first END_OF_DOCUMENT_TOKEN_TO_BE_REPLACED

Spanish Doña Josefa Ortiz de Dominguez, a Mexican patriot as well as a heroine of Mexico’s Independence War, made her name in history  for her bravery when she risked her own life alerting the rebel insurgents about the discovery of the Queretaro END_OF_DOCUMENT_TOKEN_TO_BE_REPLACED