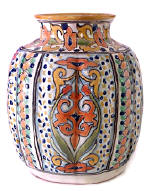 When we speak about Puebla we inevitably think about the imposing volcanoes that guard her, the Popocateptl and Iztaccíhuatl , the culinary delicacies that were created in this state, such as Mole Poblano, its baroque architecture, and of course, the ceramic of Talavera, that adorns practically every building, every patio, every square and even kitchens.

Talavera is a type of majolica earthenware, a white and glazed type of ceramic.  Although the Spaniards introduced this type of pottery, ironically the term Talaverais used much more in Mexico than in Talavera de la Reina, Spain.

In fact, Talavera is the oldest tin-glazed ceramic in America and it is still being manufactured with the same techniques as in the 16th Century.

Puebla not only was the second most important city in Mexico, after the country’s capital Mexico City, it was the most important earthenware center of the Nueva España, which was the name of Mexico in Colonial times.

The production of tiles and ceramic ware in Puebla, started almost immediately the city was established in 1531.  Thanks to the abundance of quality clay in the region and to the splendor of the arts at that time in Puebla, in a short time the  Talavera Poblana achieved such quality and beauty that it was soon exported to the rest of the continent.

There are several theories about its origin in Mexico, but the most accepted explanation is that Spanish monks from the Santo Domingo monastery in Puebla, sent for craftsmen from Talavera de la Reina to teach the indigenous people of the region how to work the clay so they could create pieces similar to the ones produced in Spain.  They wanted to decorate with tiles and religious sculptures their monastery and church.

The indigenous people of Mexico were very accomplished potters and already had a very long tradition producing earthenware.  But they did not know how to use the potters wheel or tin-glaze their pottery, which is one of the main characteristics of the majolica ceramic.

The truth is there are documents that record the presence of several craftsmen from Talavera de la Reina in Puebla during the 16th Century, which established their workshops to produce tiles and ceramic wares. It was a very profitable business since there were so many churches and monasteries being built.

In time, a potter’s gild was formed and Ordinances were laid down, that all of the potters that wished to produce Talavera had to follow. This was done so that the quality of the ceramics called Talavera was uniform and that this earthenware had a distinctive style and excellence.

Some of the rules established by the Ordinances were:

Las Mañanitas is the traditional Mexican birthday song. It is so popular that it is now sung in most Latin American countries.  Usually this beautiful song is sung when the birthday person wakes up or before blowing the candles on the END_OF_DOCUMENT_TOKEN_TO_BE_REPLACED

The artistic process and techniques used in the creation of these captivating  wooden Alebrijes. Alebrijes are carved wooden figures created by Oaxacan artisans. They have become so popular that even the world’s most respected Spanish language authority, the La Real Academia de END_OF_DOCUMENT_TOKEN_TO_BE_REPLACED

“A peoples’ creativity, its sensitivity and its finesse can all be appreciated through its pottery.”  Herbert Read Art Historian Since the emergence of the  Olmec  culture, considered to be the mother of the Mesoamerican cultures, ceramics, pottery making, took an important END_OF_DOCUMENT_TOKEN_TO_BE_REPLACED

I have been around clay all my life since I come from a family dedicated to the production of crafts made out of clay. As a child I was expected to help my parents because this was our livelihood. I END_OF_DOCUMENT_TOKEN_TO_BE_REPLACED