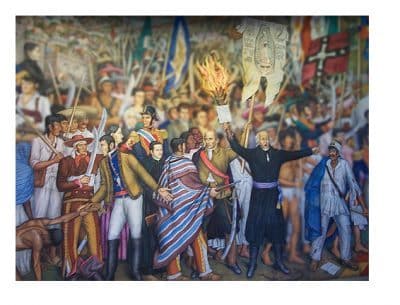 2011 was the year of the Bicentennial Celebrations in Mexico. This wonderful country commemorated 200 years of Independence from Spanish rule and 100 years of its Revolution that began in 1910 and toppled dictator Porfirio Diaz.

El Grito every 16th of September is the Mexican Fiesta par excellence! On this day Mexicans all over the world celebrate Mexico’s independence from Spanish rule.

As you know, indigenous peoples were the first to inhabit what is now known as Mexico. They created great civilizations such as the Olmec, the Teotihuacan, Maya, Toltec, and of course the most powerful of all, the Aztec Empire.

After Christopher Columbus “discovered” America, the Spaniards carried out expeditions to find gold and riches from these faraway lands. In 1521, about 500 Spanish soldiers arrived in Mexico, headed by an ambitious man: Hernán Cortés. At this time, the Aztecs had built a great empire that ruled over all Mesoamérica. So the Spaniards decided to direct their attacks towards them.

The indigenous nations that were under the Aztec rule were tired of the physical and economic hardships imposed upon them by this empire. This circumstance made them think that by helping the Conquerors defeat the Aztecs, they would be better off. So they decided to aid the Spaniards.

This is how the Conquest of what is now Mexico began.

On the 13th of August 1521, Cuauhtémoc, the last Aztec emperor was captured. The indigenous allies of the Spaniards raided Tenochtitlan, the capital of the Aztec empire.

They didn’t know it at the time, but they had been liberated from one oppressor and fallen in the hands of a much more powerful authoritarian.

This was the beginning of three centuries of Spanish rule. The new colony was named Nueva España, New Spain.

Las Mañanitas is the traditional Mexican birthday song. It is so popular that it is now sung in most Latin American countries.  Usually this beautiful song is sung when the birthday person wakes up or before blowing the candles on the END_OF_DOCUMENT_TOKEN_TO_BE_REPLACED

Spanish Cinco de Mayo Hero When “Cinco de Mayo” is mentioned in Mexico, one of the most symbolic battles in the Mexican collective unconscious immediately comes to mind: the Battle of Puebla. General Ignacio Zaragoza, with only a small army, END_OF_DOCUMENT_TOKEN_TO_BE_REPLACED