Mesoamerica was a cultural region, that originated more than 3000 years ago. It was divided into areas, differentiated from each other but with many common features. It extended from central Mexico to Nicaragua & Costa Rica.

The first humans who arrived in America had already gone through all the evolutionary phases to become homo sapiens.

The most accepted theory is that about forty thousand years ago, the first group of Asians arrived in America crossing the natural bridge that formed in the Bering Strait. Later, the Wisconsin Glaciation began to retire and a corridor was opened through Alaska. 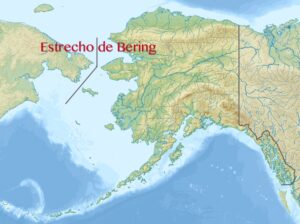 During that time there were many animals, now extinct, like the mammoth, the mastodon, the camelops, the glyptodon and the cave bear.

For a long time, various Asian groups, ethnic and linguistically diverse, came to the American continent.

These men were nomads, who survived by hunting, fishing, gathering fruits, and made weapons and stone utensils. 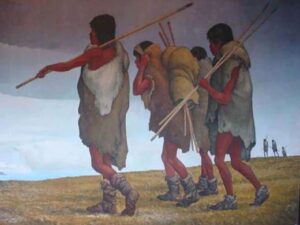 Mural at the National Museum of Anthropology

Eventually these people migrated south until they reached what is now South America. In Santa Isabel Ixtapanan, Mexico, an elephant skeleton with an obsidian tip attached to a rib was found. Very close to it was a body of a man who perhaps perished during the hunt.

This ancestor of  the Mexican people, known as the Man of Tepexpan, was 1.70 m tall and was about seventy years old.

The economy of these cultures was based on agriculture, and they often developed advanced irrigation systems. 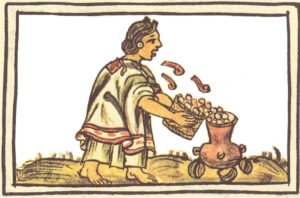 Maiz, corn, was the most important crop, but the ancient Mexicans also grew beans, squash, cotton, tobacco, cocoa and other fruits and vegetables. They raised dogs and turkeys. They hunted and fought with  weapons.

Español  This huge monolith with at least 500 years of existence seems to speak to us from its silence of stone. The sunken eyes of Tonatiuh, the Aztec sun god, look out from the center of this cyclic sequence of glyphs END_OF_DOCUMENT_TOKEN_TO_BE_REPLACED