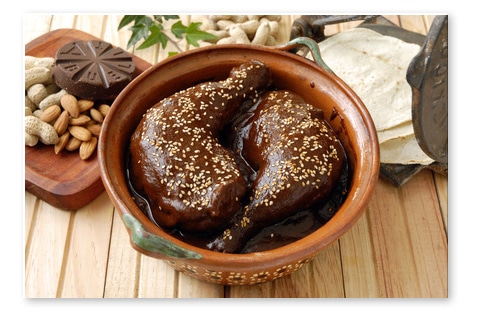 ¿Sabías Que…Did you know that: In  supermarkets today you can buy all kinds of concentrates, pastes and cubes to make mole in just a few minutes. And if you would like to serve a good, red rice as well, all you have to do is buy a little bag of rice that is almost ready to be served! I wonder what the Poblana nuns would think of such heresy?

This section is dedicated to Mexican Cuisine, which like other artistic expressions of our country, is rich and varied. There is a different type of cuisine in each region of Mexico. This is why we say that Mexican cuisine is really one of the most complete in the world.

Puebla  state is not only known for its baroque architecture, its marvelous Talavera ceramics,  its colonial convents and its handcrafts, but also for its excellent cuisine, especially that created in the convents, which produced delights that we still enjoy today.

The creativity of the 16th , 17th and 18th Century Poblana nuns gave us dishes like chiles en nogada, mole poblano, chalupitas, and innumerable sweets we still savor. In fact, the sweets of Puebla are so well liked that the city’s Calle 6 Oriente Street has an infinite number of stores that sell them, the reason why it is popularly known as La Calle de los Dulces or “Candy Street”.

The word Mole comes from Nahuatl mulli or molli, “sauce” or “concoction”.  There are many different regions of Mexico have their own recipes of Mole, but the Poblano is the most popular.

If there is a fiesta or celebration you can bet there will be Mole served!

Clean, wash and boil the chicken or turkey.
Cook and cut into pieces, and then fry them in lard.
Puree  the tomatoes and the chipotle chiles and add to the chicken.
When cooked through, add one quart of chicken broth.

The word Flan comes from the old French flaon, which means custard.  The history of Mexico’s  famous dessert goes back to ancient Rome, where domesticated chicken produced too many eggs which then were used to make custard. The Spaniards, when they conquered what END_OF_DOCUMENT_TOKEN_TO_BE_REPLACED