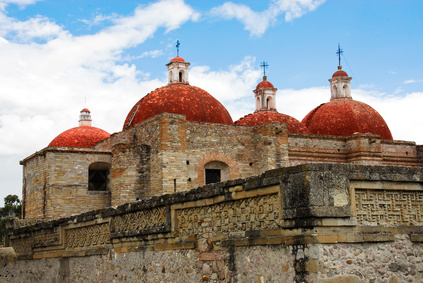 Oaxaca occupies a fundamental place in the universe of Mesoamerican civilizations.  It is the point of encounter between the Nahuan towns of the central plateau, the Mayans of the Yucatan Peninsula, and the ancient inhabitants off the coast of the Gulf of Mexico.

For thousands of years Oaxaca has been a fundamental part of the Anahuac civilization’s cultural matrix in part thanks to the imposing mountainous units that shelter it.  It is in the Central Valley’s system, surrounded by a sea of protective mountains where the majority of indigenous nations live in one state.  In this magnificent ancient state  the most important cultural elements of the ancient indigenous civilization have been preserved along with a magical appropriation of diverse cultural elements brought by the Europeans.  This fusion has produced the most formidable kaleidoscope of shapes, colors, tastes, sounds, aromas and rhythms which make up the popular cultures of Oaxaca, an essential part of the Mexican cultural identity.   In fact, the Olmec civilization,  known as the mother culture of Mesoamerica, left testimonies of its presence in the imposing archeological zone of Monte Alban situated in the Valley of Oaxaca.  In this region, the Olmec influence can be appreciated in the famous stone carvings known as “The Dancers,” human figures in strange tenuous positions which archeologists date to five hundred years before the Christian Era.

Oaxaca’s vast artistic heritage is reflected in masterpieces made of gold, silver, copper, clay, stone, wood, bone, and fig tree paper, which today are exhibited in many museums of the world and archeological zones like Monte Alban, Mitla, Yagul, or Daninzu, and it is also present in the overflowing sensibility and creativity that is alive and vibrant in the sons of the sons of these early Oaxacans.  In fact, the creativity and sensibility of the indigenous and peasant towns of contemporary Oaxaca, are an expression, a continuity of thousands of years of human development which has lived in this region of the Mexican territory.  What makes up the roots and the essence of artistic creation today, is the same for Oaxacan artists such as Rufino Tamayo, Francisco Toledo and Rodolfo Morales or Teodora Blanco, Doña Rosa and Manuel Jiménez, who represent a continuation and a popular expression of this ancient language, expressed with clay, wood, or cotton.

Oaxacan art flows directly from the spirit of its creators, form the world known  artists to the simple indigenous and peasant artist families.    Popular art is a way of seeing and feeling the world and life.  It is an ancestral way of expressing the most profound emotions that exalt human consciousness.

Oaxacans live and feel art as an essential part of their daily life.  For them it is similar to making a garment of clothing, and to carving a piece of wood, or preparing one of Oaxaca’s seven chile sauces.  The popular artist leaves a piece of himself in each work, but the difference is that he leaves it with humility and simplicity, without existential pretensions or external recognition.

The sculptor, the carver, or the weaver work day to day with patience and harmony.  Their “doing” is intimately mixed with their “being.”  An equilibrium exists then with the same devotion that they [use to] tend to their small animals; they work their land and carry out their daily chores in front of the potter‘s wheel, the blades, or the loom.  This form of living art in an ancestral way has characterized Oaxacan towns.  Their attachment to traditions, holidays, uses, and customs is already legendary within the national context.  The genesis of this plurality of artistic and cultural expressions that coexists in Oaxaca is not only due to the millenary foundations of its indigenous cultures, but also to these values and principles which remain in use in all the communities of the Oaxacan geography.

The sensibility and creativity of the Oaxacans has made them “masters” in the field of popular art, in music, in culinary arts, and fine arts.  Oaxaca is the land of artists where “God never dies,” because each day it is revitalized in the wonderful works of art that its artists create, as in a embroidered napkin, a wood carving, or in a woven tapestry.

To attend a “tianguis”, market, or a festival in Oaxaca is to find the harmonic union between the spirit and the mundane, between creativity and sensibility, between the divine and the sacred.  The popular artist is the most genuine representative of an ancestral aspiration which lives in communities.  Popular art in Oaxaca is communal and representative of a ancestral form of perceiving and understanding life, death, beauty, nature, shapes, light, and color.

Oaxacan art is the reason and the essence of life, the most transparent expression of “being Oaxacan,” which brings Oaxaca to being the artistic heart of a profound Mexico.

The artistic process and techniques used in the creation of these captivating  wooden Alebrijes. Alebrijes are carved wooden figures created by Oaxacan artisans. They have become so popular that even the world’s most respected Spanish language authority, the La Real Academia de END_OF_DOCUMENT_TOKEN_TO_BE_REPLACED

Oaxaca occupies a fundamental place in the universe of Mesoamerican civilizations.  It is the point of encounter between the Nahuan towns of the central plateau, the Mayans of the Yucatan Peninsula, and the ancient inhabitants off the coast of END_OF_DOCUMENT_TOKEN_TO_BE_REPLACED