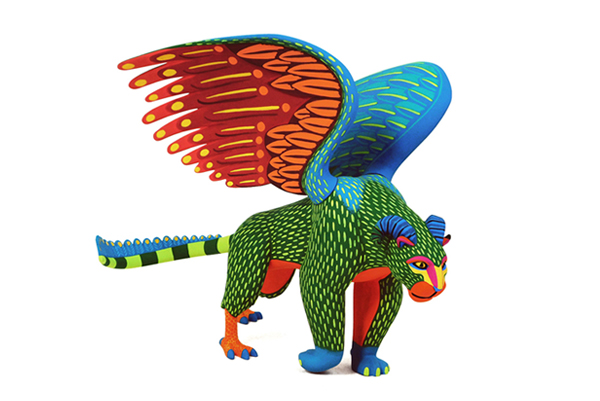 The artistic process and techniques used in the creation of these captivating  wooden Alebrijes.

Alebrijes are carved wooden figures created by Oaxacan artisans. They have become so popular that even the world’s most respected Spanish language authority, the La Real Academia de la Lengua Española, Spanish Royal Academy, has included the term “Alebrijes” in its official Spanish language dictionary.  The term “Alebrijes” originated from the name that Mr. Pedro Linares, of Mexico City, gave to his fantastic creations of paper maché; which are internationally recognized.

Most Oaxacan artisans simply call them figuras “wooden figures”, naming them after the animal which they carved, such as the deer, raccoon, leopard, etc., but when a fantastic figure is elaborated, the artisan is compelled to say he has created an “alebrije.” 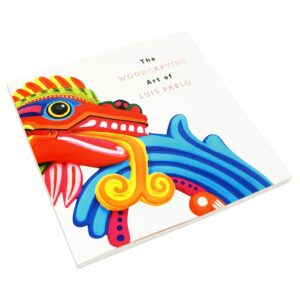 The creative process in making a wooden figure begins with the artisan imagining a form. On occasion, ideas arise spontaneously but sometimes artisans take days or even months imagining a very special figure. The wooden piece is then chosen. It will be used to create the figure that is in his mind.  Most artisans use “copalillo” wood to carve their figures. A few others use the “tzomplantle” and cedar.

The “copalillo” is a tree that grows in warm regions of Oaxaca.  There are several species and scientifically it is classified as belonging to the “Burseras” family.  Artisans classify “copalillo” trees as being either male or female. This differentiation is quickly made by simply looking at the tree and smelling it.

The ideal “copal or copalillo” is the female, which doesn’t have “knots” in its bark and smells somewhat like a lime (citric fruit). The female is used because it is softer and easier to carve. The male copal  is not used because of imperfections in its bark and its hardness; which makes it extremely difficult to carve.

Once the branch or the wooden piece has been selected, it is cut from the tree.

Some artisans prefer to carve the wood immediately to take advantage of the softness of the wood, while others leave it to dry in the sun for two or three days.

Once in the shop, its shell is removed. Initial cuts are made with the machete to form a rough idea of what the artisan has imagined. This gives it an initial proportion and size. Eventually during the process they start using finer and sharper blades that are more precise and make  finer cuts. Some artisans use other tools apart from knives and blades; for example, chisels, mallets, blades of different shapes and sizes, etc.

Once the figure has been carved, it is exposed to the sun. The amount of time the figure spends under the sun depends on the size of the figure: the small ones only a day, the big ones up to a month. Some artisans prefer drying the figures in the shade so that the drying is more natural and not so abrupt and exposed to the sun’s rays.

Las Mañanitas is the traditional Mexican birthday song. It is so popular that it is now sung in most Latin American countries.  Usually this beautiful song is sung when the birthday person wakes up or before blowing the candles on the END_OF_DOCUMENT_TOKEN_TO_BE_REPLACED

Oaxaca occupies a fundamental place in the universe of Mesoamerican civilizations.  It is the point of encounter between the Nahuan towns of the central plateau, the Mayans of the Yucatan Peninsula, and the ancient inhabitants off the coast of END_OF_DOCUMENT_TOKEN_TO_BE_REPLACED

A visit to Mexico is marked by the colorfulness found in the streets, the homes, and the utensils, an example of the joy every Mexican emanates, of his imagination, his skill in producing the most wonderful works, and in particular, his ability to create fantasies. Continue reading →