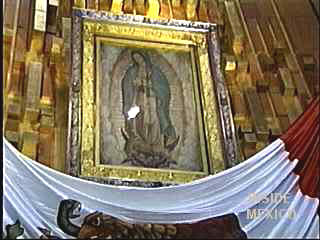 Before the Christmas season “officially” begins on December 16, day when the first Posada takes place, Mexicans join together for the festivities of La Virgen de Guadalupe, Our Lady of Guadalupe, on December 12. This is one of the most important dates in the Mexican calendar.

On this date, thousands of  the faithful to Our Lady of Guadalupe,  from all over the country make the most important pilgrimage of all those undertaken during the year to the Basílica of Guadalupe, in Mexico City, where the miraculous image of la Virgen Morena is kept.

On the day before the great celebration, thousands and thousands of people start to arrive.  Many of them make the trip from their place of origin by bicycle.  Trucks follow them to provide assistance and for them to have a place to rest if necessary.  I was very moved when I saw all these riders, mainly men, tirelessly  riding their  bikes kilometer after kilometer, with their hearts set on seeing la Morenita – our Lady of Guadalupe.  The monumental atrium of more than 46 thousand square meters begins to fill up.

Some of the pilgrims arrive on their knees as a sign of their enormous devotion and gratitude for a favor received.

There are many groups of dancers and musicians  that have come to offer their art to the Virgin.

By nighttime, the atrium is filled to bursting with pilgrims.  People of all ages and of all regions of the country gather together, physically as well as spiritually.

A mass is officiated inside the Basilica and it is at this moment that  I could really feel the warmth and spiritual richness of the people.

Although it is in the Basílica de Guadalupe where the most important rituals and celebrations of this special date take place,  there are fiestas all over the country in Honor of Mexico’s Patron Saint.

This beautiful legend recounts the love story of two young Aztecs,  Xóchitl and Huitzilin, a romance from which the cempasuchil flower was born. This wonderful love story began when the two young Aztecs were still little. They used to spend all their spare time END_OF_DOCUMENT_TOKEN_TO_BE_REPLACED

La Basílica de Nuestra Señora de Guadalupe The Basilica of Guadalupe is one of the most visited Catholic Shrines in the world and it is the National Shrine of Mexico.  Located in the north of Mexico City it is considered the END_OF_DOCUMENT_TOKEN_TO_BE_REPLACED