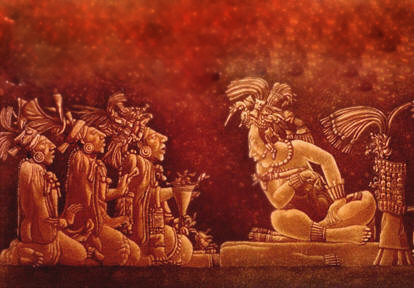 The Popol Vuh is divided into three essential parts:
-The first is a description of the creation of the world and the origin of man, who, after several failed attempts; was made from corn, the food that was the basis of their diet.

“In the beginning of creation it is told how everything was quiet, silent, dark– void of life and color;   there was only the sky and a tranquil sea.    It was then that the gods decided to create man …   In their first attempt, they created men of clay, but the effort failed. Then they tried with wooden dummies, but they had no  knowledge or recollection of their creators, so they were destroyed in a great flood.. …
The gods insisted on continuing and created four men and four women of corn, but these had an extraordinary vision and unparalleled wisdom.

Then the gods decided to diminish their vision and intelligence. From these men and women created in corn came the families that would populate the earth”.

The second part centers on the narrative of the adventures of the twins Hunahpu and Ixbalanque: the young gods that defeat the evil forces of Xibalba, or hell. “Legend has it that these twins were given birth on a mountain … Hunahpu and Ixbalanque grew, learned many arts and had great physical and spiritual power; they harmed no one.

They had extraordinary adventures, and performed wonderful miracles … The boys followed the instructions given them to destroy the lords of hell, but were no longer resurrected; that’s how Ixbalanque and Hunahpu defeated the lords of Xibalba and thus avenged the death of their father. They then went up to heaven: one was placed as the Sun and the other as the Moon”.

– The third part is a detailed history relating to the origin of the indigenous peoples of Guatemala, their migrations, distribution within the territory, war and the dominance of the Quiche race over the others until shortly before the Spanish conquest.

The richness of these accounts, the symbolism of the characters and the implied meaning in the stories have made this book a classic on par with the Iliad, the Odyssey, the Ramayana or even the Bible itself, but above all, for being one of the few reliable examples of one of the world’s most enigmatic and mysterious civilizations.

This beautiful legend recounts the love story of two young Aztecs,  Xóchitl and Huitzilin, a romance from which the cempasuchil flower was born. This wonderful love story began when the two young Aztecs were still little. They used to spend all their spare time END_OF_DOCUMENT_TOKEN_TO_BE_REPLACED