White | The purity of the Catholic faith.

Red | The Spaniards that joined in the quest for Independence. The blood of the National Heroes 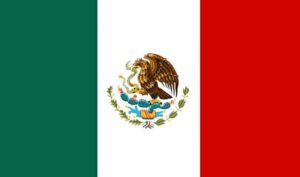 The emblem-shield of Mexico’s Flag, symbolizes the Aztec heritage. According to a beautiful legend, the gods had advised the Aztecs that the place where they should establish their city was to be identified when they saw an eagle, perched on a prickly pear tree, devouring a serpent.

They saw this mythical eagle on a marshy lake that is now the zócalo or main plaza in Mexico City.

The Mexican flag was created in 1821, when the Independence movement had ended victoriously.

El Día de la Bandera or the Fiesta of the Mexican Flag is celebrated on February 24.