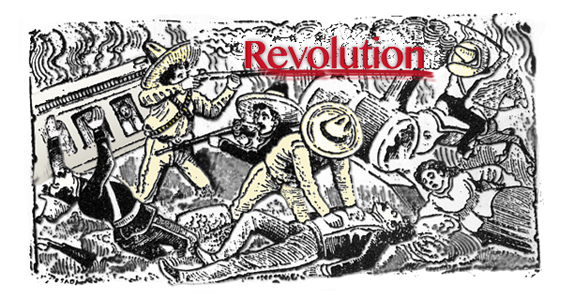 Ending date: There is controversy regarding the end of the Mexican Revolution. Some sources believe it is marked by the Proclamation o the Mexican Constitution in 1917. Other sources state that it was in 1924 when President Plutarco Elias Calles took office.

Objectives-Goal: The initial purpose of the revolutionary movement was to overthrow General Porfirio Diaz who had been in power form more than 30 years.

September 15-16, 1910: President Porfirio Diaz presides over the Centennial Celebrations of the Mexican I Independence.

October 5, 1910: Francisco Madero, after fleeing to the United States, proclaims the Plan de San Luis in which he asks all Mexicans to rise against the government of Porfirio Diaz.

November 18, 1910: A date is set for Sunday 10  of November 1910.  The Serdan Brothers along with other Madero followers fight the police in the City of Puebla. This marks the beginning of the armed war.

November 6, 1911: President Francisco I Madero took office after winning the elections in October 1911.

February 22, 1913: President Madero was assassinated by orders of  Victoriano Huerta.

March 26, 1913: Following The Plan of Guadalupe, a document drafted on March 23, 1913, by Venustiano Carranza that nullified any claim of legitimacy of Huerta’s government, Carranza, and Alvaro Obregon call to arms against Huerta‘s regime.

April 3, 1914: After taking the city of Torreon in Coahuila Pancho Villa and the Northern Division are on their way of defeating  President Victoriano Huerta‘s forces.

December 6, 1914: Zapata and Villa occupy Mexico City and march with a force of 50 thousand men.

February 5, 1917: The Mexican Constitution is promulgated.