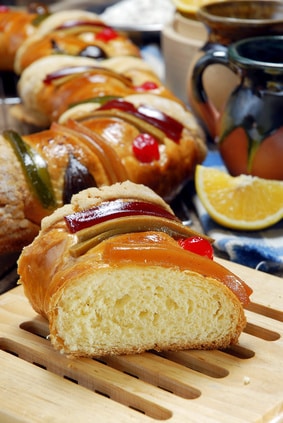 The Merienda de Reyes is truly a multicultural event.

The Spaniards brought the tradition of celebrating the Epiphany and sharing the Rosca to the New World.  The Rosca is served along with Tamales, made of corn which was the pre-Hispanic food per excel lance, and hot chocolate.
Chocolate is also a gift from the native peoples of the New World.

Hidden inside this delicious Rosca, a plastic figurine of the Baby Jesus. The Baby is hidden because it symbolizes the need to find a secure place where Jesus could be born, a place where King Herod would not find Him.

Each person cuts a slice of the Rosca .  The knife symbolizes the danger in which the Baby Jesus  was in.

One by one the guests carefully inspect their slice, hopping they didn’t get the figurine.

Whoever gets the baby figurine shall be the host, and invite everyone present to a new celebration on February 2, Candelaria  or Candle mass day, and he also shall get a new Ropón or dress for the Baby Jesus of the Nativity scene. 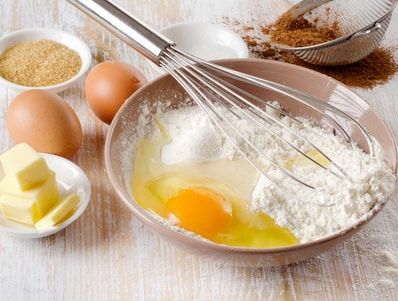 The word Flan comes from the old French flaon, which means custard.  The history of Mexico’s  famous dessert goes back to ancient Rome, where domesticated chicken produced too many eggs which then were used to make custard. The Spaniards, when they conquered what END_OF_DOCUMENT_TOKEN_TO_BE_REPLACED

Spanish When the first missionaries arrived in Mexico, they were faced with a very different way of life than the one they were used to.  The conquest meant not only taking over territories that had recently been discovered as America, but END_OF_DOCUMENT_TOKEN_TO_BE_REPLACED