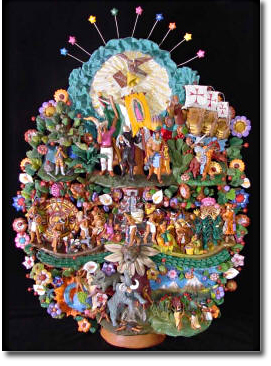 Mexican Trees of Life or Arboles de la Vida are one of the most popular expressions of Mexican folk art.  For more than 100 years Metepec, in the State of Mexico, has been known for its unique ceramic creations, mainly the Arbol de la Vida, tree of life, a clay sculpture covered with flowers, leaves and biblical figures. In essence it is a multi-decorated candelabra.

Trees of Life used to have as a central theme the Garden of Eden. Nowadays many other stories are recounted through this splendid clay sculptures…Mexico’s history, the Day of the Dead, The Nativity, Noah’s Ark, and some are even autobiographical, telling the potter’s or the customer’s own story.

Mexican Arboles can be traced back to the early colonial period when Spanish Friars commissioned the indigenous potters to create candelabras with biblical figures such as Adam and Eve. It was a way of evangelizing or teaching the Catholic faith to the New World incorporating elements of their own culture, such as their ceramic traditions.

This magnificent expression of Mexican Folk Art is thought to have begun either in in Izucar de Matamoros in the state of Puebla or Metepec in the State of Mexico  . Nowadays there are three localities where these fabulous works of art are created: Metepec, Izucar de Matamoros and Acatlan. 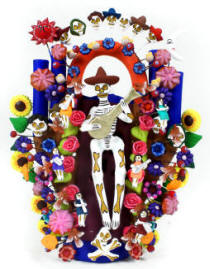 Day of the Dead
Tree of Life 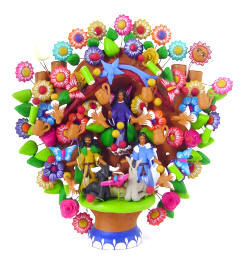 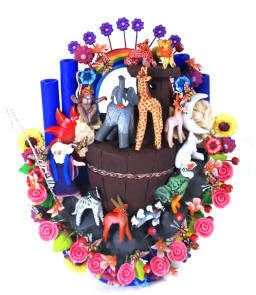 Ofrendas are an essential part of the Day of the Dead celebrations. The word ofrenda means offering in Spanish. They are also called altares or altars, but they are not for worship.   Some people mistakenly think that Mexicans that set up ofrendas for their defunct END_OF_DOCUMENT_TOKEN_TO_BE_REPLACED

This beautiful legend recounts the love story of two young Aztecs,  Xóchitl and Huitzilin, a romance from which the cempasuchil flower was born. This wonderful love story began when the two young Aztecs were still little. They used to spend all their spare time END_OF_DOCUMENT_TOKEN_TO_BE_REPLACED

The Day of the Dead  IS NOT the Mexican version of Halloween. Mexicans have celebrated the Day of the Dead since the year 1800 B.C.     It is not scary or morbid. There are no pictures END_OF_DOCUMENT_TOKEN_TO_BE_REPLACED