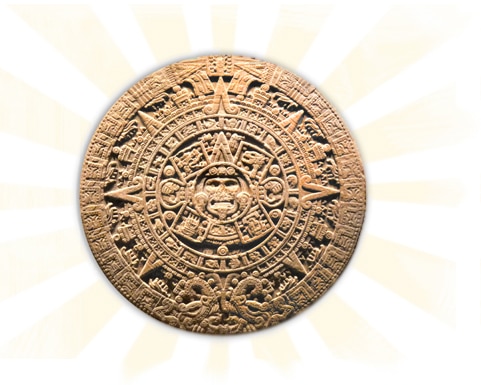 The Spaniards abandoned the monolith near the Viceregal Palace, leaving it outside at the mercy of the elements. Then, in an effort to erase all signs of the magnificence of the Mexica culture, it was turned face down and buried.

There it remained for two centuries until December 1790, when renovation works were carried out in the city, and was found just under half a meter of dirt, full of mud.

The discovery triggered many reactions. It was proof that the Aztecs were not uncivilized barbarians as the French and English thought at the time.

The Aztecs were a very civilized culture that knew and used the geometric circle and was able to create a work of poignant beauty like that monolith.   So a few months after being discovered, it was decided it would be placed in the west tower of the Metropolitan Cathedral, so it could be admired by all who visited the beautiful city of Mexico.
That same year another Aztec monolith was found, the impressive Coatlicue (Earth goddess of life and death), a complex figure difficult to be understood by the Spanish conquistadors.

These two amazing discoveries ignited the sense of the Mexican people of their right to be an independent, sovereign nation..

Although obviously liberal influences from Europe had already permeated into 1790 New Spain’s society, undoubtedly the Sun Stone and Coatlicue became a spark that ignited the wish to rebel, the trigger that was needed to start the war for independence from Spain.

From its privileged location, the Sun Stone was a quiet witness to this and other battles, such as the American occupation in 1847. For more than 100 years it stood outside it was sheltered in the  Monoliths Gallery of the National Museum, in the Historic Center of Mexico City.

Its permanent location is now, and has been for decades, in the Bosque de Chapultepec at the world-known National Museum of Anthropology.  It finally  has a place of honor and the central element in the impressive Mexica Room.