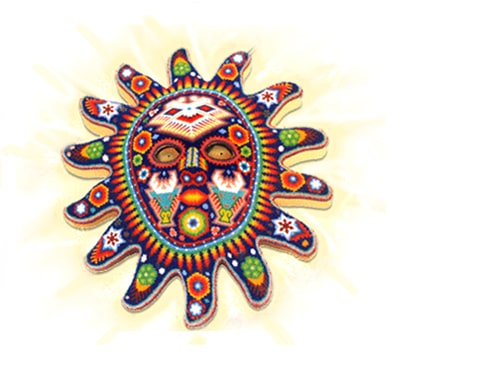 When the first men became conscious of the light that was emitted from the sun, and the relationship that exists between light and day; darkness and night; the sun and the moon;  they assigned them each values.  The sun received the positive values: life and flourishing nature;  the moon’s values were a little more negative: the world of the dead, a decline.

From the sun comes positive energy, and to him, “Tonathiu”, the highest honors are given in the festivals and traditions that come from the “life cycles” – the same cycles which are associated with the arrival of Spring.

In all of the pre-Colombian cultures, the sun is associated with the Spring rituals, when life is reborn and flourishes.  It is also the time of year to prepare the fallow land for harvest.  In the “huichol” pueblos, a ritual is prepared for the “deer”, which is the sun that carries light to the pueblos throughout the three-day celebration.

The figure of the sun is even present in the roundness of our Mexican tortilla, which nourishes and provides energy for our body.  The form of the tortilla – round — and the corn – yellow like the sun – bring together symbolic elements of the positive values.

The Pre-Hispanic cultures took advantage of the light of the sun, converting into energy for their own bodies.  They would rub their hands together vigorously, and then expose their hands to the sun of the heavenly star for several minutes, sitting on the ground with their legs crossed in the lotus position.

In archaeological centers across the world, it has become a tradition for the people to receive the equinox.  As the pyramids attract energy, people arrive dressed in white, ready to receive the forces of the sun.  Many arrive early in the morning, climb the pyramids, and find a good place to receive the energy.  Some wear flower necklaces; others wear red handkerchiefs around their foreheads; and those who are the most deeply rooted in the tradition light incense and walk in huaraches or go barefoot along the edifying rocks.

Las Mañanitas is the traditional Mexican birthday song. It is so popular that it is now sung in most Latin American countries.  Usually this beautiful song is sung when the birthday person wakes up or before blowing the candles on the END_OF_DOCUMENT_TOKEN_TO_BE_REPLACED

This beautiful legend recounts the love story of two young Aztecs,  Xóchitl and Huitzilin, a romance from which the cempasuchil flower was born. This wonderful love story began when the two young Aztecs were still little. They used to spend all their spare time END_OF_DOCUMENT_TOKEN_TO_BE_REPLACED

Read Article in Spanish Mexico celebrates Valentine’s Day, El Dia del Amor y la Amistad on February 14.  Warm, festive and generous, this is how most foreigners who’ve had the opportunity to live for a while among us, define Mexicans and the END_OF_DOCUMENT_TOKEN_TO_BE_REPLACED