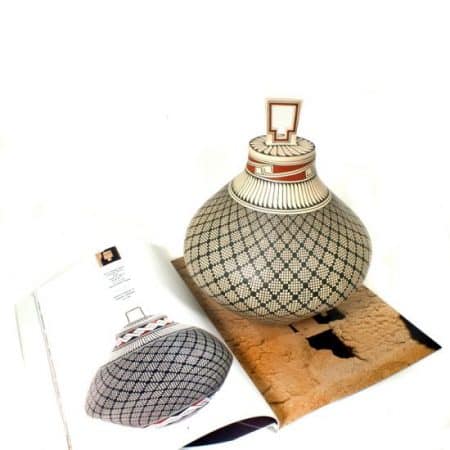 “A peoples’ creativity, its sensitivity and its
finesse can all be appreciated
through its pottery.”

Since the emergence of the  Olmec  culture, considered to be the mother of the Mesoamerican cultures, ceramics, pottery making, took an important place in the lives of the Mexican people.

The earthenware vessels, anthropomorphic figures, and various types of tools found in the archaeological ruins of the ancient  Olmec  cities of  Tajin ,  San Lorenzo ,  La Venta  and  Tres Zapotes , suggest the techniques used in their ceramics: the use of clay, the knowledge of  primitive firing techniques, their means of coloring and painting designs.

The  Olmecs  transcended their era (1500 BC -800 AD) and handed down their knowledge to the cultures that flourished after them. 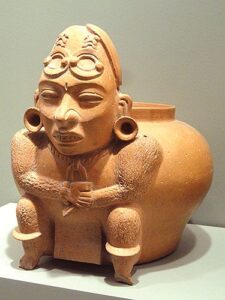 The  Teotihuacans  (100 BC – 800 AD) prepared the majority of their vessels with clay and decorated them with a variety of techniques: mainly stucco, painting, and smoothing.

The pottery of the  Aztecs  (1325 AD – 1521 AD) was extremely varied. They made all types of earthenware, plates, jugs, cups, pots, mostly with red and orange clay.

The  Mixtecs  stood out for their polychrome lacquer ceramics, in which after polishing a piece, they would cover it with white stucco and then paint it.

To the north, the  Casas Grandes culture (100 A.D. – 1360 A.D.) produced  beautiful polychrome ceramic, basically with geometric motives and influences from the Mimbres culture.

Each region had its own unique characteristics in pottery.  However, in all these cultures, the potter himself was given a great deal of importance.  The Aztecs summed it up in the following way:

“A good potter:
he puts great care into his work,
he teaches the clay to lie,
he speaks with his own heart,
he brings life to things,
he creates them,
he knows everything as if he were a Toltec
he makes his hands skillful.”

The ancient techniques employed to make ceramics are still used today – mostly in the rural parts of Mexico. It’s curious how these groups were able to preserve their artistic techniques – coil building, open firing, natural pigments – and yet they lost their original language and their religion.

Las Mañanitas is the traditional Mexican birthday song. It is so popular that it is now sung in most Latin American countries.  Usually this beautiful song is sung when the birthday person wakes up or before blowing the candles on the END_OF_DOCUMENT_TOKEN_TO_BE_REPLACED

The artistic process and techniques used in the creation of these captivating  wooden Alebrijes. Alebrijes are carved wooden figures created by Oaxacan artisans. They have become so popular that even the world’s most respected Spanish language authority, the La Real Academia de END_OF_DOCUMENT_TOKEN_TO_BE_REPLACED

I have been around clay all my life since I come from a family dedicated to the production of crafts made out of clay. As a child I was expected to help my parents because this was our livelihood. I END_OF_DOCUMENT_TOKEN_TO_BE_REPLACED