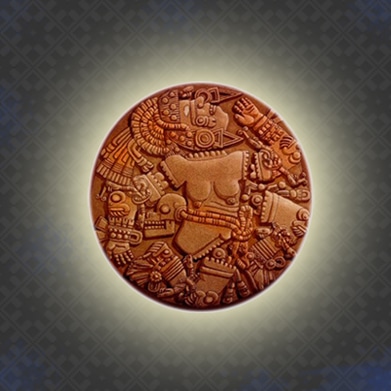 Aztec legend recounts the story of Coatlicue, the goddess of life and death and the mother of the Four Hundred Southerners, Centzon Huitznahuas, gods of the Southern Stars and Coyolxauhqui who ruled over her brothers.

Coatlicue, lived in Coatepec, where she did penance sweeping. One day while sweeping, a beautiful feather fell from the sky, she picked it up and placed it on her breast.

When she finished sweeping she looked for the feather and couldn’t find it.  She then realized she was pregnant.

Coatlicue was very scared and sad, but her son Huitzilopochtli, who was in her womb, told her not to fear because he would protect her.

She felt comforted and calmed her heart.

Meanwhile, Coyolxauhqui and her brothers planned the revenge against their mother. Cuahuitlicac, one of the brothers went looking for her and Huitzilopochtli to tell them  of their terrible plans.

The Four Southerners led by Coyolxauhqui, then headed toward the mountain, ready to kill thier mother, but again Cuahuitlicac  was able to inform them that the warriors were already on their way.


From the moment he was born Huitzilopochtli, instantly became an adult; he took a shield of eagle feathers, arrows and turquoise darts.

Huitzilopochtli painted his arms and legs blue, he drew diagonal stripes on his face and on his head he placed a crown of feathers; he wore on the right foot a feathered sandal.

Using a snake he controlled as a weapon he managed to wound his sister Coyolxauhqui and then cut off her head; her body rolled down and was falling apart completely dismembered.

Huitzilopochtli furious threw her head to the sky and thus it became the moon.

He then chased down the Four Southerners, from the top of Coatepetl to the foot of the mountain. They didn’t have a chance against their powerful brother.

Many of them begged for forgiveness, but only a few escaped his ire and were able to survive.

Those who escaped headed south where they became stars.

* In the Nahua mythology, Coyolxauhqui goddess of the moon, was the daughter of the mother goddess Coatlicue and regent of Centzonhuitznahua, brothers and star gods.

* Coatlicue in the Nahua mythology is the goddess of fertility, patron of life and death, rebirth, the mother of Huitzilopochtli.

This beautiful legend recounts the love story of two young Aztecs,  Xóchitl and Huitzilin, a romance from which the cempasuchil flower was born. This wonderful love story began when the two young Aztecs were still little. They used to spend all their spare time END_OF_DOCUMENT_TOKEN_TO_BE_REPLACED