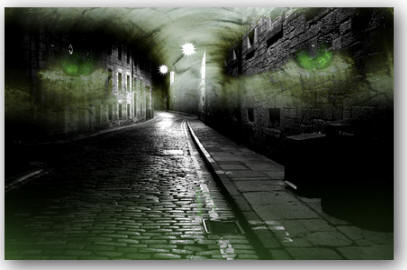 Devil’s Alley  until recently was a narrow passage  just a short distance from what is now downtownMexico City .  It started  in the clearing of Calle San Martin and merged  into Calle La Zanja.  That alley with the ominous name consisted of a dark passageway, lined with leafy trees, which also went through a solitary walkway.

In that place there was a humble shack, with no modern services and inhabited by a man suffering of tuberculosis, a common sickness at that time.  It’s therefore understandable that–whether because of the patient, the name of the alley or perhaps due to the darkness, few people ventured to enter  during the day–and much less – after sunset, when the gloomy darkness reigned.

People also said that at the struck of midnight  the Devil himself would appear in the famous alley. Many feared and avoided it but for many young people it was also a source of excitement and thrill.

On one occasion, a brave man wanting to display his courage ignored all the warnings  and, after a pleasant gathering of friends, challenged them to go through the passage.   No one took on his challenged so he ventured alone.

He walked slowly and when  almost halfway  a figure leaning against the trunk of a tree startled him.   He froze for a second  but quickly resolved to keep on going.  He thought to himself: -“So, outlaws want to attack me, eh? We’ll see about that!”

Clenching his hands into fists, he went resolutely toward the figure.  He was already within a few feet of the individual when, suddenly  a strange light illuminated the path and before his eyes  a horrendous being appeared, laughing malignantly.

The young man felt the earth sinking under his feet, he was terrified but driven by his amazing instinct of survival, he ran and managed to narrowly escape from a terrible death.

The news about the devil in the alley rapidly circulated among the people and  quickly reached  others  who’d also been frightened by the monstrous specter.  If the alley was rarely transited during the day after that incident no one dared go through it after sunset, not even by mistake!

Soon, the authorities decided to take matters into their own hands and consulted with an expert in spirits and diabolic apparitions.  The wise man told them that the only way to stop the demon from leaving his refuge in the ally and terrorizing  the community, they had to take him daily offerings of jewels and gold coins. The presents would have to be placed under the tree.

At first no one wanted to be the first to enter the alley, but eventually they went in groups  but only during the day. They  rapidly left the gifts just as they had been instructed.

The odd thing is that the superstitious ones that would leave the new offerings each morning noted that the items left the day before had disappeared, which only confirmed their conviction that the devil was pleased with the gifts provided by the people.

It didn’t take long before the mystery reached the ears of two burly fishermen who were visiting the town. Sailors who–after having survived fierce storms, dangerous journeys and countless sea legends, found this story of the alley a mere child’s tale.

“What do you think about the devil in Calle San Martin?”- said the more experienced sailor to his buddy  and continued– “I think something’s fishy “- “that devils seems more like a thief to me!” as far as I’m concerned, the good children of God, should be protected.  His sheep shouldn’t be robbed, not  even by  Beelzebub himself.”

Determined to stop the legend from spreading even more, and preventing the embezzlement from continuing any longer, they decided to end what they considered to be no more than a myth.

That same night, precisely at the stroke of midnight; two silhouettes bravely entered the dreadful alley… As usual, the alleged devil waited patiently by the tree to instill terror from the beyond upon anyone that would risk entering his  domains.

He was ready to surprise the two sailors when suddenly, the light of a torch appeared and he saw a hairy apparition; it had black horns and a long tail. It surely  looked like the Satan himself.

Still recovering from the shock; he suddenly felt a fire stinging his buttocks that burned his insides: it was a red-hot poker which had been skillfully applied in that region by one of the sailors who’d attacked him from behind.

A prisoner now of indescribable panic, the supposed demon only managed to say – “Oh Jesus; the devil wants to take me away”! Uttering terrible cries of pain; he raced away as fast as he could.

The two sailors roared with laughter as they removed the costumes they’d made especially for the occasion.

The following night the fishermen were back in the alley again, to check if some unfortunate “malevolent being” returned but, although they stood guard until dawn;  no one ever appeared in that place again.

Days later news spread of  a well-known local character who was struggling between life and death from a strange and sudden illness. He had sores and burns  apparently caused by deep burns.

Some time after, the now healthy individual– who in the people’s opinion was none other than that “fake devil”– repented of his sins and donated loads of jewelry to an institution for the poor, including what many knew were the same jewels  that they’d offered long ago to the devil by the tree.

Today, all that remains as a reminder of the events occurred is the suggestive name of Devil’s Alleywith which the sinister nook was known for many years.  This alley  finally disappeared  when the picturesque network of roads in Mexico City’s Historic District gave way to the modern Metropolitan area we know today.

Las Mañanitas is the traditional Mexican birthday song. It is so popular that it is now sung in most Latin American countries.  Usually this beautiful song is sung when the birthday person wakes up or before blowing the candles on the END_OF_DOCUMENT_TOKEN_TO_BE_REPLACED