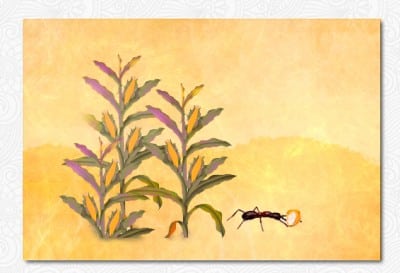 An ancient legend tells the story that before the arrival of the god Quetzalcoatl, the Aztecs only consumed roots and game animals; they did not eat corn because it was beyond their reach, hidden behind the massive mountains surrounding the city.

The other gods had already sought to part the mountains for the Aztecs to gain access to this precious food, but they never succeeded.

The Aztec people sent their priests to ask Quetzalcoatl to help them get the corn. He answered them that he would go and bring them back this precious food.

All of the other gods had already tried to move the mountains by using force, Quetzalcoatl decided to use something more powerful… intelligence.

Quetzalcoatl was transformed into a small black ant and in the company of a red made his way toward the mountains.

The path presented many difficulties, but one by one he overcame them, determined to move forward by the thought of helping the Aztec people.

After several days, Quetzalcoatl arrived at the back of the mountains where he found the corn and, being an ant, took a grain between his teeth and began his journey back.

Once he returned to his people, he handed over the grain of corn to be planted.

From that day onward, the Aztecs were devoted to cultivating and harvesting the corn plant and thus become a strong people, full of riches and achieving an impressive development of beautiful cities, temples, and palaces.

Las Mañanitas is the traditional Mexican birthday song. It is so popular that it is now sung in most Latin American countries.  Usually this beautiful song is sung when the birthday person wakes up or before blowing the candles on the END_OF_DOCUMENT_TOKEN_TO_BE_REPLACED

“…As long as the world exists, the glory and honor of México Tenochitlán must not be forgotten.“ Chimalpahín Quauhtlehuatzin             Neither conquest nor time, nor new foreign influences have been able to erase from the Mexican memory, the splendor of its END_OF_DOCUMENT_TOKEN_TO_BE_REPLACED