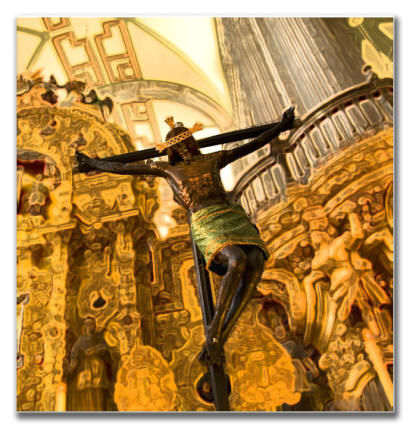 For the Spaniards, conquering the Aztec capital, Mexico-Tenochtitlan, was only the first of many battles waged to finally impose their culture on the inhabitants of those rich lands, which for many years remained true to their beliefs and traditions.

It took the friars of various orders that arrived soon after the conquest several centuries’ worth of blood and patience before evangelizing “almost” the entire territory now occupied by Mexico. Even today, there are several indigenous strongholds faithfully preserving their traditions just as they existed in ancient times.

The Colonial period of Mexico is full of stories that reflect this battle between evangelists and the conquered: the former, to impose a new faith and the latter to maintain the worship of the ancient gods; whether Maya, Mexica or Purepecha.. It’s known that the Indians hid figures of their ancient deities behind both figures of Christ and images of saints, in order to thus keep worshiping them, even in the very presence of the priests.

To evangelize the natives, the missionaries made use of every possible resource. Take the case of Fray Diego de Landa, who, in an auto-de-fé, act-of- faith, burned all the idols, sacred objects and Mayan codices in a bonfire that remained lit for three days. This was undoubtedly a terrible loss, not only for Mexico but for the whole world.

But this is not to say that there was only destruction on the part of the evangelizers. Take the case of Fray Pieter van der Moere, also known as Fray Pedro de Gante, who at the Convent of Acolman called on all the Indians to join a great play representing the birth of Christ so that they could all understand the Catholic faith, thus giving rise to one of the most cherished traditions of Mexico: the theatrical productions known as  Las Pastorelas.

Over the first decades as a Spanish colony, New Spain became an example for the rest of the Spanish cities, due to the devotion with which it guarded the values ​​of the Catholic faith, but above all, thanks to the profusion of churches, chapels, convents and religious hospitals that were built one after another, all with a dazzling beauty that left nothing wanting in artistic detail: gold-covered altarpieces, oil paintings by renowned artists, fine wood and fabrics, delicately worked figures…

By the 17th century, New Spain was a city whose beauty rivaled that of any major European city. Cultural syncretism and wealth gave a unique personality to this city of wide streets whose layout had still traces of the former Tenochtitlan, but which displayed beautiful baroque facades… It is in this context that one of the most popular legends of the colonial era in Mexico was born.

Our Lord of the Poison

The Mexican historian Artemio Del Valle Arizpe collected in his book, ‘Traditions and Legends of the Streets of Mexico’, the story of two neighbors in New Spain: Don Fermin Andueza and Don Ismael Treviño, who were involved in an event that many consider  a miracle and others a legend.

Don Fermin was a gentleman whose wealth could well have saved him the trouble of getting up early every day. However, his devotion got him up every morning before sunrise. Discreetly garbed in his black cloak, he left his home and headed to mass. At the end of the mass he headed back home again, but not before stopping at a figure of Christ of great stature bearing a sorrowful expression.

Every day, Don Fermin deposited a gold coin in the offering plate at the foot of the image, who’s bloodied feet he humbly kissed. Don Fermin never missed his morning appointment. The neighbors said that this was one of many examples of the nobility that ruled the gentleman’s soul. It was said that help came generously from his wealth to aid the poor that sought him out.

Don Ismael Trevino was equally rich, but his soul was dark and envious. The good of others weighed heavily upon him, especially that of Don Fermin Azueta, of whom he felt deeply jealous. He took every opportunity to speak ill of him and bitterly cringed when anyone said something in praise of the noble lord.

This envy, of unknown cause, moved Don Ismael to interfere in all of Don Fermin’s business dealings.  But everything would backfire on him: Don Fermin overcame every obstacle and was a successful businessman.

Hatred for the man entered into the heart of Don Ismael and the day came when he longed to see him dead. Subjugated to this evil feeling, he began planning how he could murder his enemy without arousing suspicion.

After much thought, he concluded that the best way to get rid of Don Fermin was to poison him. He found a man who had the perfect poison: a blue-colored liquid that did not kill immediately, but rather, after ingested it would spread throughout the body and after a few days caused the desired effect. It was painless and didn’t leave any trace.

Don Ismael laced a delicious cake with the deadly liquid and sent it to Don Fermin in the name of a good  friend, the Town Hall alderman.  Don Fermin was very pleased, and far from imagining the danger he was in, he immediately enjoyed a piece of cake with his steaming cup of chocolate…

Eager to know the results of his crime, Don Ismael followed every step his victim took. He waited for Don Fermin every morning in church and from a distance watched his every move.

Don Fermin entered the church with the slow majesty which characterized him. He greeted everyone as he did every morning and listened attentively to the priest at mass.

When mass was over, he went to the worshiped Christ figure and prayed.  Then he knelt to kiss the figure’s feet. He had barely touched them with his lips when a stain – black as ebony – spread over the pale figure.

A look of fear and amazement crossed Don Fermin’s face and that of all who were near the figure of Christ.  But the one who uncontrollably trembled with fear and dread was Don Ismael, who immediately ran to kneel before Don Fermín and loudly confessed his envy and how he’d planned to assassinate him.

It was clear that the Christ, in order to protect Don Fermin, had absorbed the poison and as evidence, had changed color.

The noble gentleman looked at Don Ismael and felt compassion. He softly offered him words of forgiveness and embraced him like a long lost brother.

Some of the men who had witnessed everything, wanted to lay hold of Don Ismael, but Don Fermin stopped them saying he had already forgotten the offense. Instead, he asked them to pray with him and thank Christ for saving his life.

Don Ismael left the church pale and crestfallen. That same day he left the city and was never seen again.

News of the miracle ignited the fervor of the inhabitants of New Spain.  Since that extraordinary moment people have flocked to the church to offer candles and prayers.

One afternoon, some of the candles fell and ignited the Christ figure. It was soon replaced by another beautiful figure, black as well, and was taken to the altar of the Metropolitan Cathedral in Mexico City’s Historic Center, where it is visited by many faithful to this date.