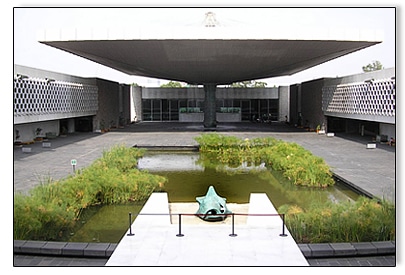 Beyond the architectural beauty of its building, the importance of the National Museum of Anthropology  lies in the fact that through it, we maintain a close relationship with our past.

In its 27 rooms, pre-Hispanic Mexico meets  the Mexico of today. This is how we keep our Aztec roots alive, perpetuating them and saving them from oblivion.

There is a magical element in the coincidence  that this spot is located in the legendary Chapultepec Park, a site so respected and admired by the Aztecs, that because of its beauty was the exclusive place of the Tlatoanis, emperors of the great México Tenochtitlán.

Magic and precise, because if the ancient Mexicans had chosen a space on the earth for their burial, a spot in the Anahuac Valley that would guard their essence, they would no doubt have chosen a place in this woods, witness to their arrival, development, and the splendor of their empire.

The Aztec Room is especially majestic. Here we find the world-famous Aztec Calendar, the goddess Cohatlicue, a spectacular mock-up of the Tlaltelolco market, and a reproduction of Moctezuma’s headdress, among many other pieces.

The museum  does not only display the magnificence of Mexico’s pre-Hispanic cultures; it also has an area for temporary expositions which has presented large exhibits of other cultures, such as “The greatness of Greece and Sicily”, or the more recent “Etruscans”. These exhibitions have given Mexicans the chance to experience the beauty of these majestic cultures.

Fortunately for all Mexicans, this museum will again host various international expositions, such as for example, “Imperial China: the Xian Dynasties”, and “The Cloud Men”, from Chile.

Another very interesting event will be the 12th Anthropology and History Book Fair, that attracts more than 125,000 visitors.

The museum is a testimony of the legacy of our ancestors, so that it does not remain hidden, lost in the jungle or asleep under the earth, but rather rises and shows itself in all its splendor, not just to Mexicans, but to the entire world.

We hope you will be able to visit Mexico soon!

If you would like to make a virtual visit to the National Museum of Anthropology, click in at:

And if you are interested in Aztec civilization, visit the Templo Mayor Museum:

And speaking of the Templo Mayor, which is very near Constitution  Square (“Zocalo”) in Mexico City,. a Mexican Rock concert by the Café Tacuba group took place last weekend in this huge square, which is the heart and soul of our city. Imagine, Rock in the Zocalo. I am surprised by the idea that this square, precisely where the Aztecs found an eagle devouring a serpent, the signal the gods gave them in order to identify the place where they were to build their city, is now the scene of a huge rock concert.

It is here, in the Zocalo, where the merging of times and cultures that shape the Mexico of today, is a daily occurrence.

Hours  Opened Tuesday to Sunday 9 AM to 7 PM.  Mondays closed.