There are military parades as a way of paying tribute to all the heroes, soldiers and civilians that gave their lives for their country. Schools participate in parades too. It takes months of rehearsal and preparation for marching bands to perform and compete among others to be the best. Parades are so popular that people wake up very early and rush to the streets seeking a good spot to watch and enjoy them.

In the Peñón de los Baños, a small barrio or neighborhood in Mexico City, very near the airport, the people organize a very popular representation of the Cinco de Mayo battle. This play is a tradition that the people of the Peñón have kept alive for many years. Some of the inhabitants play the French invaders and others the Mexican army. They even have fights with real gunpowder rifles! And sometimes they do get hurt. 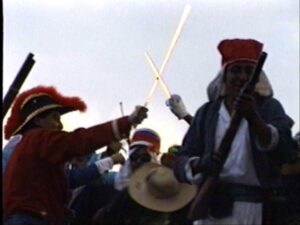 Each city has a Zócalo, where celebrations take place and people of all ages enjoy themselves. The square livens up with music, laughter and vibrant colors.

Families with young children are the first to arrive. Later the young people will fill up the place.

No celebration can be complete without food. A few days before the big event, hundreds of stalls start aligning on the streets near the Zócalo of all the towns. Restaurants all over offer the most representative of Mexican cuisine: Mole Poblano. A thick spicy sauce that comes from blending more than 40 ingredients, and is spread on top of turkey or chicken and Mexican style red rice. Mole is so popular that it is served on nearly every important occasion.

There are usually shows in the squares where there are dancing and music with the ever so popular mariachi bands.

Everybody is there to have fun and make noise with whistles and rattles and horns. In most towns there are fairs set near the squares where people enjoy the rides and play games.

Cinco de Mayo ends with the traditional shouts of ¡Viva Mexico! and people looking forward to the next National Holiday: El 16 de Septiembre Día de la Independencia de Mexico” , where we’ll have the chance to celebrate once again!

Our Cinco de Mayo Video captures all of these gaiety and patriotism. You can really feel the festive atmosphere, see the people celebrating, and enjoying the food and music. You almost feel like you are there, celebrating with us!

In 1861, due to the precarious situation of the country and its high international debt, Juarez announced a moratory of payments. Spain, France and the United Kingdom, the main countries to whom Mexico had debt with, decided to invade the END_OF_DOCUMENT_TOKEN_TO_BE_REPLACED