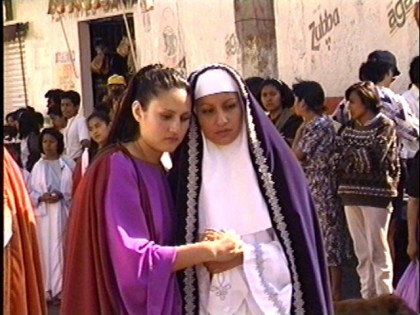 The passion play of Iztapalapa is one of the most popular and one of the biggest, most important religious celebrations in Mexico and in the world.

In just one day, more than a million visitors come to a small district to watch a 150-year-old tradition. What is behind this event? What motivates the inhabitants to go through this representation with so much dedication? What does it mean?

Iztapalapa is a small district south of Mexico City, an ordinary neighborhood like any other, with its main plaza and its church. It has perhaps, the same problems as other districts (or colonias, as they are called) but something sets it apart from the others: a very special fiesta in which everyone takes part, where no one, no matter how small, is left out.

During Easter Week, each inhabitant abandons his normal life as a laborer, student or housewife, and forgets his daily tensions and conflicts. All the townspeople come together with a common goal, and become actors representing Jesus, the Virgin Mary, the Nazarenes, the guards, the apostles, and the people of a town that existed thousands of years before. The entire community becomes the cast and the streets, the stage!