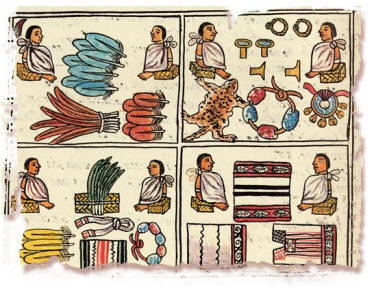 Long and delectable is the list of ingredients and flavors that Mexico brought to the world. Exotic and spicy flavors with bright colors that invite you to taste them. While many recipes from pre-Columbian times have been forgotten, practically all of the ingredients have survived.

Thus, we Mexicans have a living legacy from our ancestors, one that we share proudly with the world.

CORN (Tlaolli)  Considered a sacred plant; corn is the most important staple of both past and present-day Mexicans. The Mexica people of the Great Tenochtitlan reported that the Toltecs, a civilization that emerged in the state of Hidalgo, were responsible for introducing the cultivation of maizeduring the seventh century AD. However, thanks to archaeological finds, today we know that corn has been present in the Mexican diet for more than seven thousand years. From Mexico come two universally known ways of consuming corn: the Mexica baked it in the form of a large, thin and flexible wafer called tlaxcallior tortilla, which is also the basis for savoring a delicious taco and the Mayans learned to pop the corn kernels to become what is now known as popcorn, except that they used it to make bracelets and necklaces.

BEANS (Etl)  The second pillar of Mexican cuisine for many centuries, the bean, has transcended its original territory to join the staple diet of many nations, including Brazil and France. There are seven major varieties of beans, grouped by color and size. One of the big advantages is that beans can be eaten when they are still tender (green beans) or once they’ve dried. Beans also have high nutritional valuesince 20 percent of their composition is made up of proteins. One of the most traditional dishes in Mexican cuisine is ‘frijoles charros’ (or ‘ranch-style beans’), cooked with onions, epazote and pork cracklings. The Yucatan Peninsula is particularly famous for its ‘frijoles puercos’ (or “pig beans”), made with pork.

CHILE (Chilli)  Chile is the third pillar of Mexico’s pre-Hispanic cuisine.  An essential guest for every meal in homes throughout the country, chile was so important to the ancient Mexicans that they kept thorough accounts of the chile tributes to be paid by subdued provinces, as described in the Codex Mendocino.

There are six varieties of cultivated chile, which generally has a high vitamin C content , in addition to being attributed various healing properties: it is a diuretic, an appetite stimulant and is known to cure some skin infections.

The Essential Element of Mexican Cuisine Tortillas are the quintessential staple food of the Mexican diet and cuisine. A flatbread as well as an instrument to eat, the tortilla is now popular all around the world. Tacos, tostadas, chips, quesadillas, enchiladas and burritos wouldn’t END_OF_DOCUMENT_TOKEN_TO_BE_REPLACED