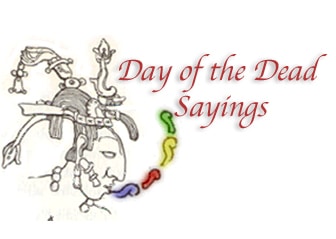 There is more time than life.

The deceased climbed on me!  Which means: “It really scared me!”

I don’t even believe in the peace of the tombs anymore.  “I don’t trust anyone”

You’re afraid of the defunct but use his shroud to cover yourself!      It is used when someone is criticizing another one, but at the same time he takes advantage of him.

Death peels my teeth!  Which means “Death can’t do anything to me!”

He who lives with hope dies happy.

Ofrendas are an essential part of the Day of the Dead celebrations. The word ofrenda means offering in Spanish. They are also called altares or altars, but they are not for worship.   Some people mistakenly think that Mexicans that set up ofrendas for their defunct END_OF_DOCUMENT_TOKEN_TO_BE_REPLACED

This beautiful legend recounts the love story of two young Aztecs,  Xóchitl and Huitzilin, a romance from which the cempasuchil flower was born. This wonderful love story began when the two young Aztecs were still little. They used to spend all their spare time END_OF_DOCUMENT_TOKEN_TO_BE_REPLACED

The Day of the Dead  IS NOT the Mexican version of Halloween. Mexicans have celebrated the Day of the Dead since the year 1800 B.C.     It is not scary or morbid. There are no pictures END_OF_DOCUMENT_TOKEN_TO_BE_REPLACED