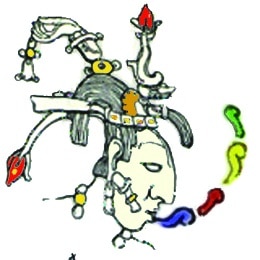 Con dinero baila el perro.
With money even the dog dances. Everybody has a price.

Dime con quién andas, y te diré quién eres.
Tell me who you hang out with and I’ll tell you who you are.

Cría cuervos y te sacarán los ojos.
Raise crows and they will peck your eyes out.  If you don’t  educate, transmit good values to your children in the end they will take advantage of you as well.

El que mucho abarca, poco aprieta.
He who wants to hold everything holds nothing. Do not spread yourself too thin.

El que se fue a la Villa perdió su silla.
He who left for the Villa lost his chair. Those who leave loose what they abandon.

Before, it was mostly women who received gifts, chocolates and flowers. Today, it is   quite common for girls to ask boys out as well, and so  store windows ‘for Him’ are also dressed up with paper hearts, wallets, lotions, shirts END_OF_DOCUMENT_TOKEN_TO_BE_REPLACED