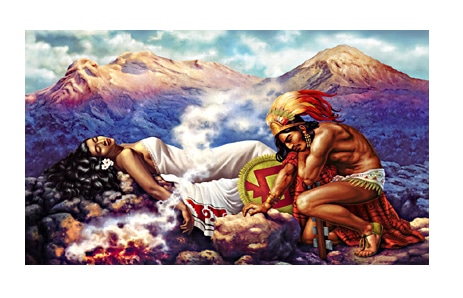 The view that adorns the world’s largest city – Mexico City – is enhanced by the majesty of two of the highest volcanoes in the hemisphere: Popocatepetl and Iztaccíhuatl. The presence of these enormous millenary volcanoes has been of great significance for the different societies that have admired and revered them, being a source of inspiration for the many legends about their origin and creation.

Among these, the best known are two below. Thousands of years ago, when the Aztec Empire dominated the Valley of Mexico, it was common practice to subject neighboring towns and to require a mandatory tax. It was then that the chief of the Tlaxcaltecas, bitter enemies of the Aztecs, weary of this terrible oppression, decided to fight for his people’s freedom.

The chief had a daughter named Iztaccihuatl: the most beautiful of all the princesses, who had professed her love for young Popocatepetl, one of her father’s people and the most handsome warrior. Both professed a deep love for each other, so before leaving for war, Popocatepetl asked the chief for the hand of Princess Iztaccihuatl.

The father gladly agreed and promised to welcome him back with a big celebration to give him his daughter’s hand if he returned victorious from the battle. The brave warrior accepted, prepared everything and departed keeping in his heart the promise that the princess would be waiting for him to consummate their love. Soon afterward a love rival of Popocatepetl, jealous of the love they professed to each other, told Princess Iztaccihuatl that her beloved had died in combat.

Crushed and overwhelmed by sadness, the princess died without even knowing that it was a lie. Popocatepetl returned victorious to his people, hoping to find his beloved princess. Upon arrival, he received the terrible news of the death of Iztaccihuatl.

This beautiful legend recounts the love story of two young Aztecs,  Xóchitl and Huitzilin, a romance from which the cempasuchil flower was born. This wonderful love story began when the two young Aztecs were still little. They used to spend all their spare time END_OF_DOCUMENT_TOKEN_TO_BE_REPLACED

Christmas in Mexico — my first year in the country, I thought that was an oxymoron. How could it ever feel like Christmas here without snow on the ground; without a fire in the fireplace; without the fireplace?! Well, my first END_OF_DOCUMENT_TOKEN_TO_BE_REPLACED