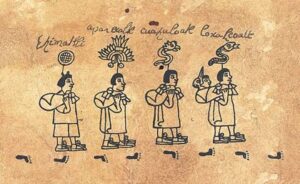 The future Aztecs or Mexica, formed by the Nahua peoples, on orders of their god Huitzilopochtli, the Sun and War god, had to abandon the place where they lived and start a pilgrimage to find a place where an eagle perched on a prickly pear cactus, devouring a snake would be.

Huitzilopochtli told the Aztecs that when they found the eagle it would be the signal that they had reached land where they would build the most powerful empire in Mesoamerica, Middle America.

“…As long as the world exists, the glory and honor of México Tenochitlán must not be forgotten.“ Chimalpahín Quauhtlehuatzin             Neither conquest nor time, nor new foreign influences have been able to erase from the Mexican memory, the splendor of its END_OF_DOCUMENT_TOKEN_TO_BE_REPLACED