Following their god’s orders they began a centuries’ pilgrimage and traveling from place to place, learning and being inspired by the different peoples they encountered.

After years of traveling from place to place they finally arrived at the Lake of Texcoco, where they saw in the distance, on a small island in the middle of the lake, an eagle on a cactus devouring a snake. It was here that their arduous pilgrimage would finally end. 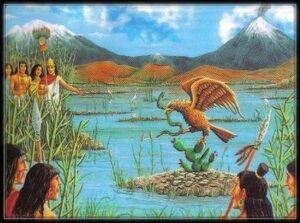 It is believed that this moment of divine revelation took place in the year 1323.  By  1325 they had founded the great city of Tenochtitlan.

The characteristics of this area were essential for their survival.  Because of its natural isolation it offered military and economic advantages.

This beautiful legend recounts the love story of two young Aztecs,  Xóchitl and Huitzilin, a romance from which the cempasuchil flower was born. This wonderful love story began when the two young Aztecs were still little. They used to spend all their spare time END_OF_DOCUMENT_TOKEN_TO_BE_REPLACED